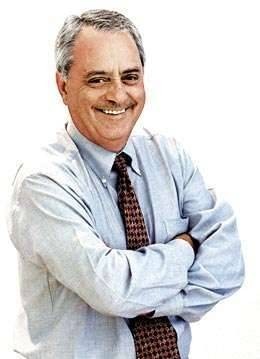 IF only he was still around today. Rugby league – the game Peter Frilingos spoke about with pride – is at an all-time high at the moment.


A season Chippy would have passionately absorbed, enjoyed and analysed. Sadly, though, Chippy is not here today.

It was one year ago this afternoon he was taken from us by a heart attack.


But for those here at The Daily Telegraph, Chippy's legacy, humour, honesty and spirit will never die.


Those opinions would have been aired time and again this season from the Newcastle drama, to Mundine, to Hopoate, to video referees.


Anthony Mundine: "He's not the sharpest tool in the shed."


The Newcastle Knights-Bathurst scandal: "That'll do me [as he throws his hands up in the air]."


NRL's fine for Newcastle: "It came over like a bolo punch."


Lightweight Brett Finch involving himself in a brawl last week: "If they get a hold of him all that will be left is an eyebrow and the tongue out of his shoe."


Hopoate again: "He's an imbecile [pronounced im-b-ceel]. Pull over and give yourself an upper-cut."


Princess Mary's past year: "She's been around the world more times than Yuri Gagarin."


Newcastle's Dane Tilse, the villain in Bathurst: "Isn't he a gibberer [followed by vibrating his lips with a finger]."


Video referee: "It's not rocket science"


English referee Russell Smith: "What, is he speaking Swahili [or Lithuanian]."