submitted by Kytherian Newsletter Sydney on 10.05.2013

Photograph of the Kouvoulis Water Mill in Karavas 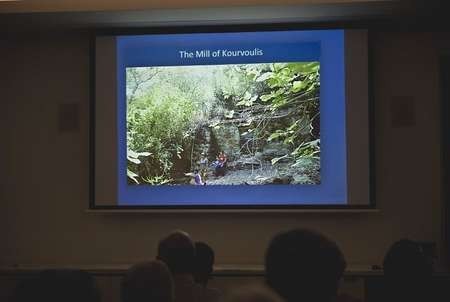 The Presentation was made by:

The presentation was held at the University of Sydney at 7.15pm, Wednesday, March 20th 2013

At the Centre of Classical and Near Eastern Studies Board Room, in the Madsen Building  Level 4,
Room 480 (one storey up and directly behind the building’s main foyer on the Eastern Avenue pedestrian mall).

What follows is George Vardas's Report of the event.

Download Tim and Lita's summary of their presentation, here:

"Traditional mills belong to the cultural memory of people because they are associated to a still recent past and appeal to the countryside roots of people". (1)

The watermills of Kythera are traditionally associated with the village of Milopotamos (literally, the village of the watermills). However, to the north of the island, the verdant terraced landscape of Karavas is also rich in water, deep green gorges, free-running springs, walking trails and abandoned stone-built watermills which the Karavas Water Project seeks to explore.

On 20 March 2013 the leaders of this project, Professor Timothy Gregory and his colleague and wife, Lita Tzortzopoulou-Gregory, of Ohio State University gave an enthralling presentation to an audience of more than fifty (including a number of Karavites) at the Centre of Classical and Near Eastern Studies Board Room at Sydney University.
Lita started off by setting the scene for what it would have been like to live in the village of Karavas when the water mills were operating and how the social life often gravitated around those mills and the famous water springs, for which the village was renown, and vividly recalled the abundance of popular folk legends and stories associated with them.
Professor Gregory then proceeded to explain how the Karavas Water Project, by taking an environmental, topographic, archaeological and historical approach, seeks to examine the historical use of water resources in the northern part of Kythera throughout antiquity and up to the modern day.

According to the local historian and writer, Ioannis Cassimatis, the first watermills appeared in Kythera in the late eighteenth century. It is thought they were introduced from Crete where mills were built during the Ottoman and Venetian occupations. Traditionally, the mills, which were either single or two storey buildings, were built in the prevailing architectural style of the village.

Professor Gregory observed that Karavas stands out because of its plentiful springs and deep green gorges that resemble a sub-tropical rainforest in marked contrast to the barren, parched landscape of other parts of Greece. Indeed, the defining marker of Karavas is its watershed that runs in a generally southwest-northeast direction from the heights near Gerakari to the sea at Plateia Ammos.

From 2011 Timothy and his team took to the island small groups of university students as volunteers to help clear overgrown vegetation from the springs and watermills and undertake research on the various water installations, including the channels, cisterns and mills, and their use. They also spoke to local residents and former residents about their memories of the mills and have begun recording those oral histories. The cleared walking trails have also helped enhance Karavas’ reputation as an eco-tourism destination.

By means of a powerpoint presentation, including photographs and drawings of what some of the areas in Karavas now look like, once they have been cleaned of the dense vegetation, Timothy took the audience on a virtual tour of some of the ten watermills in the gorges of Karavas, including the impressive Magganou mill and cistern, and the mills of Paliomylos, Kourvoulis, Portokalia and Keramari and their sophisticated water channels and storage areas. He also mentioned Loutro which may date back to the 18th and 19th centuries (according to travellers’ accounts) and the possibility of its being used for bathing in Roman times.

As the molinologist Stelios Mouzakis has observed:

“The watermills of Kythera … are constructions on a small scale of the anonymous traditional architecture of Kythera. They are impressive in their special characteristics, the harmony of their volumes, their simplicity, their picturesque appearance, the modesty of their local building materials, the solutions they manifest to various constructional difficulties, but mainly by their unpretentious, effortless incorporation into their surroundings.”(2)

Professor Gregory also discussed how the systems of irrigation were used for the perivolia and the communal arrangements made between farmers and mill operators to exploit and share the water. Tim even alluded to a reference to the watermills in Spiro Stathis’ remarkable Kytherian Review published in 1923. In his survey of industry on Kythera in the year 1923, Stathis reported on the number of operating watermills on the island. Apart from Mylopotamos, we learn that there were five functioning watermills in Karavas operated by Panagiotis Coroneos, Haris Vanges, T. Tzortzopoulos, P. Tzortzopoulos and Ioannis Venardos.

Sadly, according to Cassimatis, the last watermill on Kythera ceased to operate in the late 1940s as the advent of power on the island meant that the mills were no longer economical to operate.

Finally, it is noteworthy that Timothy and Lita Gregory have established the impressive Amir Ali research centre, incorporating a library and dormitory, in Karavas to promote further research and greater understanding of the Karavas watershed and the historic, archaeological and cultural traditions and structures associated with water use on the island.

A big thank you goes to Timothy and Lita for their passionate and ongoing interest in Kytherian archaeology, as well as to Wayne Mullen, Executive Director of the Australian Archaeological Institute at Athens, for offering the venue at Sydney University for the lecture.

After the presentation, members of the audience were treated to coffee and biscuits put on by the Kytherian Association together with some exquisite chocolate offerings from Fardoulis Chocolates. It was enough to make anyone thirsty.