Ringing a bell for Rengis 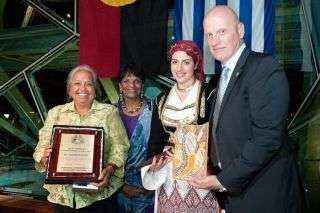 A celebration of magic, memories and human bonds at Federation Square, Melbourne

Glenda Humes with her sister Judith Standen and John Nikolakakis, President of the Pancretan Association of Melbourne (R) with his daughter Polina.

A special fundraising concert at Melbourne's Federation Square for the 42nd Street Memorial in Crete, headlined by The Xylouris Ensemble, was a night of history and music, but more so, it was a night of magic, memories, emotions, and human connections.

Not many who attended the concert in the inspiring atmosphere of the BMW Edge arena, on the banks of the Yarra river, had dry cheeks after being addressed by the ancestors of ANZAC soldiers who fought in Crete; especially after witnessing the onscreen reunion of the family of Reg Saunders, tracing the footsteps of their father, to meet with the Cretan Zacharakis family who protected the Aboriginal Digger from the Nazis in 1941.

The concert celebrated the connection between Greece and Australia, between Cretan villagers and a group of remarkable New Zealand and Australian soldiers who went on the run after the Battle of Crete.
The concert paid tribute to the ANZACS who fought in Crete, and one of the last survivors of that time, 99-year old veteran Leslie Manning who served with Reg Saunders in the 2/7th Battalion, in the audience as guest of honour.

With George Donikian as MC, the story of ANZAC soldiers in Crete was told through a presentation by historian Dr Peter Ewer, and unique archive footage from the time.

Present in the audience was Glenda Humes the eldest living daughter of Reg Saunders, the first indigenous man to be commissioned as an officer in the Australian Army, and the initiator of the 42nd Street Memorial project.

Glenda and her sisters' journey to Crete in October 2010 became the basis of a documentary film by journalist, writer and documentary filmmaker, Michael Sweet, well-known to Neos Kosmos readers.
The night was full of emotion. Sweet gave a tantalising glimpse of his documentary film, still in development for television, showing the reconnection between the Saunders and Zacharakis families at the village square in Lambini, south of Rethymno.

Lambini was where the young soldier of the 2/7th Battalion, Reg Saunders - Rengis, as they called him, was hidden and taken care of by Vasiliki Zacharakis and her children - Areti and Yannis. 70 years later the families were united.

Celebrating the eternal connection of the Cretan and Australian people, was Reg Saunders' nephew Richard Frankland and his band, followed by an exceptional performance of The Xylouris Ensemble led by Yiorgos Xylouris, along with the Pancretan Association of Melbourne dance group.
Sweet found the story of Saunders in Crete after reading Saunders biography written in 1962 by Harry Gordon. He told the audience at Fed Square that he had "no other choice", than to try and find the village, and the Zacharakis family.

In his attempt to tell the story of the Anzacs in Crete and their eternal connection to the people of Crete and Greece, Michael Sweet, with The Xylouris Ensemble and the initiative of the PanCretan Association of Melbourne, succeeded entirely, contributing to the recognition of a remarkable Australian and all ANZACs who fought in Crete.

All proceeds from the Fed Square concert will go to the creation of an ANZAC memorial at '42nd Street', now known as Tsikalarion Street, near Chania - on the currently unmarked site of one of the ANZAC battles in Crete which made the German invaders retreat.