submitted by Kytherian Newsletter Sydney on 08.05.2006 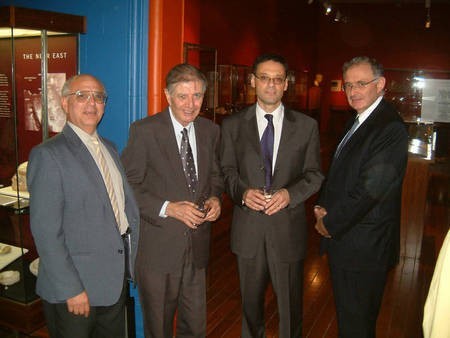 At the lecture by Dr Stavros Paspalas, Deputy-Director of the Australian Archaeological Institute at Athens, entitled Kythera: A Mediterranean Island Through Time. Sydney University

[Newsletter of the Kytherian Association of Australia.]

On 5 April 2006 more than 200 people crowded into the General Lecture Theatre in the Main Quadrangle of Sydney University to hear an enthralling lecture by Dr Stavros Paspalas, Deputy-Director of the Australian Archaeological Institute at Athens, entitled “Kythera: A Mediterranean Island Through Time”. The audience was literally taken on an enchanted tour through time and space as Dr Paspalas chronicled the significant impact which this little island has had in the broader history of the Mediterranean basin from the “deep recesses of antiquity”.

The catalyst for this renewed interest in the history of Kythera has been a number of scientific and archaeological investigations, including the Australian Paliochora-Kythera Project (APKAS) which is a project of the Sydney University Archaeological Computing Laboratory and sponsored by the Australian Archaeological Institute at Athens. The Nicholas Aroney Foundation has also provided financial support for the project which has been ongoing since 1999.

As Dr Paspalas explained, the landscape of Kythera is littered with evidence of human occupation going back millennia. APKAS is an intensive and systematic archaeological field survey which has sought to reconstruct the history and cultural dynamics of the northern part of the island. The team members literally walk across the landscape and record all archaeological material that is observed, including pottery fragments and other cultural remains that lie on the surface. In this way, the researchers gain a better understanding of the human activity in the areas that are surveyed.

The field walking in the area around Ammoutses produced pottery sherds from the Bronze Age (around 2SOOBC) with a heavy concentration of Early Helladic and Minoan-type ceramics. Ever since the work of the British in the 1960s at Kastri and more recently the excavations at the Minoan peak sanctuary below Aghios Georgios tou Vouno undertaken by Professor Yiannis Sakellarakis, it is clear that there was a substantial Minoan presence on Kythera, probably as a large settlement or even a Minoan colony. According to Dr Paspalas, the first Minoans came to Kythera in around 2000BC.

Just as the Minoans saw Kythera as a valuable outpost within the Minoan “thalassocracy” so later traders and merchants came to use the island’s frequently traveled sea lanes, taking the infamous Cape Malea as the major reference point, a mental map for mariners. It also be­came a lair for pirates and raiders.

During the Peloponnesian Wars Kythera was at various stages brought under both Athenian and Spartan influence because of its strategic naval position astride the sea routes. At one point, the island was seen as Sparta’s gateway to colonisation in Northern Africa. The floor mosaics reproduced below were found in the ruins of Carthage and appear to depict the travels of Celestial Aphrodite throughout the Mediterannean. The fortifications of Kythera are clearly evident.
On the rocky islet of Antidragonara (on the eastern side of the island near Diakofti) recent excavations have suggested that the site was a sanctuary connected to Poseidon. A number of coins were also found and these had originated from all over the Mediterranean as far away as the Bosphorus and Ibiza.

In around 960AD Byzantium took over the island at the beginning of the Medieval Period. APKAS has uncovered a settlement at Aghios Georgios Kolokythias (north of Aghia Pelagia) which predates the settlement at Paliochora. This was once a fortified complex with two churches and a cistern. The larger church proba­bly dates back to the 11th century. The settlement enjoyed great views over the sea and was a naturally defendable hillock.

Dr Paspalas then traced the shifts in population as raiders and pirates led to the settlement’s demise in the 12th century. In 1204 with the Fourth Crusade Venice got Kythera as part of the spoils of war. Kythera became but a stepping stone for the Venetian sea-going empire although it developed into an observation point after about 1500. It was in 1537 that the famous Barbarossa, the Ottoman Sultan’s admiral, wreaked havoc along the lonian island coastlines. Barbarossa regarded all and sundry associated with the Venetian Empire as “Venetian infidels” and sacked Paliochora in the process of taking numerous prisoners. In the aftermath of the Ottoman raids, Kythera’s fortifications and defences were strengthened. Castles were built in Hora and Milopotamos as an initial point of refuge for the local inhabitants in the event of future raids. For Venice, Kythera (or Cerigo as it was known) became a “beacon on to the Archipelago”. The famous castle at Hora overlooked the approaches to Crete whilst the western sea lanes were within view of the castle at Kato Hora in Milopotamos. The smaller castelli built at Avlemonas continued this trend. In 1669, however, Kythera’s influence began to wane with the loss of Crete to the Ottomans. At the same time, the harsh feudal system on the island caused resentment amongst the islanders and eventually the Venetian influence came to an end in 1797 when Kythera passed into the modern world. After a brief flirtation with the Russians and the Turks, the island became a British Protectorate in 1815 and saw an upsurge in colonial build­ing and educational reforms instigated by the British.

Unfortunately, Cerigo’s remoteness did not bode well for many an English soldier who spent time on this remote island. The travelling English satirist and writer, Edward Lear, who vis­ited the island in 1863 described the English and Scottish soldiers on the island as “blond and dreamy ... seeking on the horizon, perhaps, the fogs of their own country”.
Another commentator was somewhat less kind. In his Handbook for Ionian Travellers, John Murray wrote that “Cerigo is the ‘Botany Bay’ of the Ionian Islands” and was considered a very solitary station, although it was never a penal island.

As the flyer for the lecture reminds us, the results of the APKAS survey project have documented human presence in the northern region of Kythera from the Early Bronze Age onwards, with particular peaks during the Minoan, Classical and Late Mediaeval periods. The archaeology of the island provides a view into how the lives of the islanders were affected by developments in the wider Mediterranean world, and how they strove to exploit the resources Kythera offered. It also reflects the longevity of a rich tapestry of Kytherian history which learned academics such as Dr Paspalas, together with his colleagues Tim Gregory, Lita Diacopoulos and others, continue to bring to life.