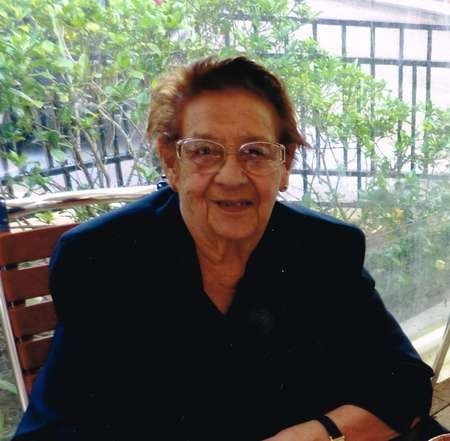 Evyenia was born on 3rd August, 1921 on the Vouno, the village of her maternal grandparents’ house, on the island of Kythera, in an area between the villages of Karava and Ayia Pelayia to parents Theodoros and Stamatoula Zantiotis. Her father built a house in Ayia Pelayia where she and her two younger sisters Haroula and the late Rothopi lived a simple life. During her childhood and teen years, she helped her parents with the harvesting of the local produce and tending to the farm animals.

She attended school in Karava on foot from Ayia Pelayia. During this period, she also experienced the hardship of WWII, where her family had to move to her grandparents’ home whilst the enemy occupied their sea side house as a base.

After the war ended, Evyenia moved to Kalithea in Athens to learn dress making. She lived with relatives and worked in their tavern. As many of her generation, post WWII, she migrated to Australia in 1948 to start a new life. She came by Marcellos Company’s plane which was unusual at this time as most travelled by boat. The plane trip took two months to arrive in Australia as there were mechanical faults and a one month wait in Calcutta, India. There were other interesting ports of call including; Cyprus, Iraq, Pakistan, Burma, Singapore and finally Darwin.

On her arrival in Sydney, her Capsanis uncles took her to Oberon and then later Evyenia stayed with Venardos relatives in Bathurst. In the next few months she met the man of her dreams who was to become her husband - Haralambos Zantiotis / Harry Zantis. Thanks to some encouragement by his eldest brother, Sarandos and the Venardos family, Evyenia and Harry were married in 1948 in Ayia Triada Greek Orthodox Church in Surry Hills.

Evyenia then moved to start her married life with her husband, where he resided in the NSW country towns of Inverell and Warialda. She worked alongside her husband’s brothers and their families.

In 1950 they were blessed with their first son George and three years later their second son Theo. Evyenia was a very devoted wife and mother who lived for her family. As times changed, she and her family moved to Sydney in 1954, to Auburn where they ran the Top Milk Bar till 1969. She worked hard in the shop for long hours.

One of her pleasures was entertaining many relatives and friends. She was an excellent cook and her specialties were spanakopita with a thick crust and the honey dipped sweets melomacarouna. Evyenia also had a determined characteristic of keeping a daily diary of her activities till the very end - something that will be treasured by her family.

In 1969 the family moved to a residential area one block away and Evyenia enjoyed the next few years raising her family and socializing. In 1977 she had much joy in the marriage of her son Theo to Matina and not long after, she, after 25 years and her husband after 54 years, made the long awaited trip back to Kythera to relive many memories. Her joy increased even more in 1979 when her first grandson Harry was born to be followed by another blessing with a second grandson Evan in 1981 and to see them grow up and be fine young men.

Many years of happiness followed but sadly her dearly beloved husband Harry passed in 1991. As most Kytherian migrant woman of her era, she continued with her great strength in assisting her family. In 1993 and 1994 she again made trips to her beautiful island of birth to revisit family and friends and with her very strong Greek Orthodox beliefs made her promised pilgrimages to the Panayia Myrtidiotissa Monastery. A change of residency occurred to Lakemba, on the infamous day of September 11th, 2001 where she and her son George lived till the present. In 2010 her grandson Evan gave her even more happiness when he married Joanne.

Evyenia was a woman of strong character, kindness and great style who always put her family, relatives, Koumbari, Godchildren and friends first. May she forever rest in peace.