submitted by Kytherian Association Of Australia on 11.12.2012 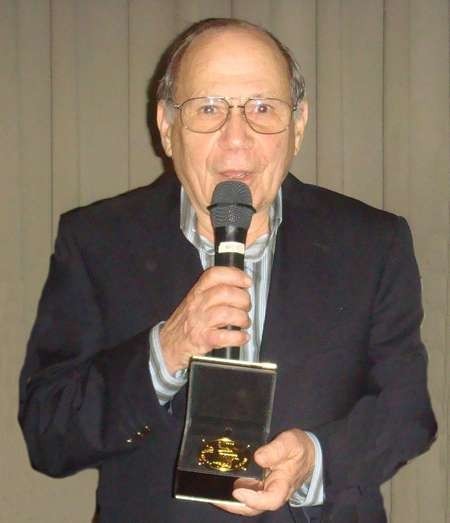 On the 10th December, 2012, at a ceremony at the Athenian Restaurant, Barrack Street, Sydney, attended by family, friends, and members of the Committee of the Kytherian Association of Australia, Angelo Notaras was presented with the Kytherian Medal of Honour.

Kytherian Medal of Honour, Reverse side.

He was also presented with a Certificate of Recognition which read:

in recognition of his achievements for the Greek Orthodox Church

and his social and cultural contribution

both in Australia and in Kythera

The Mayor of Kythera

Angelo Notaras received the award for the following services:

Services to the Kytherian Association of Australia (established 1922).

Funding for the Provicare Foundation was undertaken on an Australia-wide basis under the direction of Angelo Notaras and Father Steven Scoutas of St Spyridon Church, Kingsford. Angelo Notaras and Father Steven developed a proposal under which Angelo and John manufactured (all at their own cost) moulds to create thousands of hollow plastic batons, fashioned to resemble Greek columns, that were distributed to communities and parishes throughout Australia, to be filled with coin donations. They also coordinated the packaging, transport and delivery of the plastic batons to every single Greek Orthodox parish and community across Australia, as well as monitoring and accounting for the returns after nine months. The initial efforts raised $500,000 and, with subsequent distribution and collection of batons, the final fundraising amount totalled some $700,000. This amount has been used to further the aims of the Provicare Foundation, focusing particularly on the Sydney metropolitan area. The success of these achievements is principally due to the inspiration, financial support and commitment of Angelo Notaras.

Angelo Notaras also participated in further fundraising for the purposes of refurbishing premises provided by the NSW Government at Marine Parade, Brighton-le-Sands; a sum in excess of $100,000 was raised for the Provicare Foundation and the Greek Welfare Centre to provide social services to disadvantaged persons.

As a result of these acts of beneficence, Angelo was awarded the "Cross of St. Andrew", the Greek Orthodox Church's highest award. The medal was presented on 28 November 2003 for “valuable services to the Church and the community”. (A photograph of Angelo Notaras, with wife Mary, taken on the day of presentation, is included with this nomination).
Services to the island of Kythera, Greece, and the Greek-Australian and Kytherian-Australian community.

Kythera is a small island that lies at the tip of the Peloponnese in southern Greece. The large island of Crete is located to the South of Kythera. Since 1854, a majority of the islands’ residents have chosen to migrate to Australia. 3000 Kytherians live on the island. There are 60,000 Kytherians and their descendants’ resident in Australia.

In 2003 James Prineas, a Kytherian-Australian living in Germany, devised the concept of an electronic cultural archive, based on an open access web-site. He proposed that www.kythera-family.net be established, and that instead of being based on the ‘standard’ principle of a ‘central’ web master, monitoring and ordering web content – the kythera-family site should be accessible to all. Kytherians from all around the world were empowered to upload photographs, stories and audio-files, directly onto the site. The concept sounds passé, 10 years ‘down the track’, but at the time, it was revolutionary.

Angelo Notaras recognised immediately that the idea was brilliant. He and John agreed to provide a substantial sum as seed capital to establish the web-site. With his contribution, and his imprimatur, the site became operational very quickly. In the past 10 years the site content has grown to almost 18,000 entries. It is construed as the ‘Encyclopaedia Kytherianika’ in the world, as well as an electronic museum of Kythera. Major encyclopaedias utilise its content. It is used by many universities for educational purposes and has already been the subject of a Master’s and Ph.D thesis. It is the envy of other Greek-Australian, and cultural institutions in Australia, and around the world. (See the original ‘prospectus’ form for the website which accompanies this nomination).
In 2005, Angelo Notaras was instrumental in setting up the Kytherian World Heritage Fund. (A 4-page brochure, summarising the achievements of the KWHF to 2010 is included with this nomination). The main aim of the fund was to preserve the Kytherian heritage for the benefit of Kytherians worldwide.

The work of the fund grew out of Angelo Notaras’ initiative, along with brothers John and Mitchell, to personally fund, the publication of former Ambassador to Greece, Hugh Gilchrist’s comprehensive historical research, detailing the relationship between Greeks and Australians. Australians and Greeks, Volume 1 was published in 1992. A large print run of 5000 units was produced.

Kytherian history is also well represented. The Kytherian World Heritage Fund have produced a general history of Kythera, and specific histories of Kythera under British occupation, the origins of Kytherian Surnames, the history of the town of Potamos, books of vintage photographs taken on Kythera during the early part of the twentieth century, and the best DVD historical and tourist guide for Kythera, ever produced. All are in print, and available.

In 2012, KWHF plans to print four additional books, including Kytherian Surnames, which traces the derivation of every Kytherian surname, and a photographic book, detailing the island of Kythera from the air.

Kytherian Photography & Realia. The plate glass negative collection of Panayotis Fatseas – 1,800 valuable prints – which would have been lost to posterity, without the intervention of Angelo Notaras (Sydney), the Kythera Cultural Association, (Potamos, Kythera), under the Directorship of John Stathatos, and the KWHF. Plate glass negatives photographs taken on Kythera from the 1920’s to 1940’s were deteriorating in a storeroom on the island. Angelo Notaras provided computers, scanners, printers, archiving material, and secure storage containers for this important preservation project. This led to a major exhibition at the prestigious Benaki Museum, Athens, in 2008, and to the publication of Panayotis Fatseas. Faces of Kythera, 1920-1938. (2008).
Angelo Notaras has also been involved with a number of Special Projects on the island of Kythera.

Eye Clinic on Kythera. KWHF provided some input into conceiving the idea. It was actioned by Professor Minas Coroneo, Professor of Ophthalmology, University of NSW. Minas mobilised ophthalmologists and optometrists from Europe and Australia, brought sophisticated equipment to the island, and tested the eye sight of many residents, and treated their eyes, en masse.

Medical Equipment containers to Kythera for distribution to the Hospital (Potamos), and Aged Care Facility, (Potamos). Financial and logistical aid in collecting, packing, and shipping beds, with internal moving parts, and equipment to enhance resident and patient mobility on the island. A 20ft container was sent in 2007, and a 40ft container in 2009. This should provide the residents on the island of Kythera with access to wheel chairs and other aids, for years to come.

Library Shelving for Kythera. Logistical and financial support to despatch library shelving, from Alhambra, Los Angeles, USA, to Kythera. (2009). These shelves will form part of the first lending library to be instigated on the island of Kythera. The projects was instigated and superbly managed by Cynthia Cavalenes-Jarvis, California, USA.

Services to the Kytherian Association of Australia (established 1922).

Angelo Notaras joined the Board of the Kytherian Association of Australia in 2005 and has had a profound impact on its activities. He has made a significant contribution in both terms of advice to and mentoring of the younger members of the Board .

Since his appointment to the Board his influence has been widespread and includes the following:
Angelo has encouraged a sharper focus on cultural issues, particularly through www.kythera-family.net and the book publishing arm of the Kytherian World Heritage Fund, with the result that the Association now expends far more funds on important cultural activities than it had done hitherto. As a result, many important works - in both the English and Greek language - have been published and made available for the first time.

With his proven business acumen, Angelo has provided wise counsel at the time the Association’s Board evaluated and purchased a building for investment purposes and for the creation of a substantial cultural resource centre and library in Rockdale known as Kythera House.

Angelo advised the Board on how to best achieve the refurbishment of Kythera House in order to provide a high quality cultural centre, which would be attractive to both members and friends of the Association, in order to promote greater use of the facility and the resources amongst members of the Kytherian and wider Greek-Australian community.

He has encouraged the setting up of record and account systems to increase the Association’s membership base.

Angelo has also determinedly pursued the revised and updating of the Association’s Constitution in order to help meet the needs of a 21st century cultural organisation.