submitted by Kytherian Association Of Australia on 19.04.2012 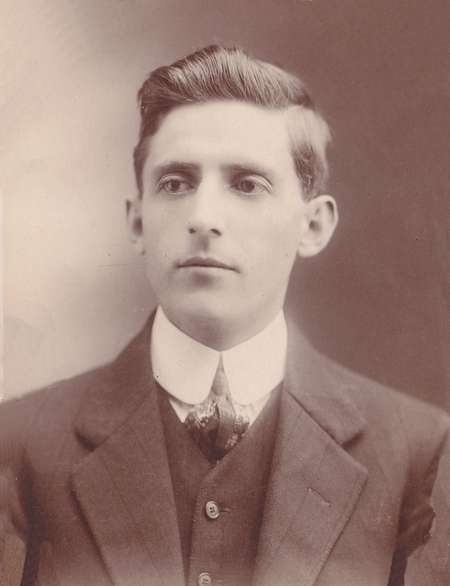 The family that established a coffee dynasty.

From, Hugh Gilchrist. Australians and Greeks. Vol I: The Early Years. p. 203.

"...From the Kythiran village of Mylopotamos came seven Andronikos (the surname spelt "Andronicus") brothers, of whom four built up a tea, coffee and chocolate business which, eighty years later, is still eminent in the beverage and confectionery field. Their interest in tea and coffee and in emigration is said to have been aroused by an uncle, Dr Karydis, a medical officer of the Suez Canal Company.

In 1907 Kosmas (known as "Charles") and Emmanuel Andronicus opened a small shop at 127 York Street in Sydney. Charles visited Calcutta and Colombo and brought back chests of tea and coffee, and fish-frying oil and crockery and fancy goods. Emmanuel, armed with samples, travelled by train around New South Wales, seeking orders from Greek and other shop-keepers for tea, coffee, olive oil, sauces, crockery, cutlery and other items, advancing credit where appropriate.

As their business grew, Charles became a kind of unofficial arbitrator in disputes between up-country Greeks, and a mouth-piece for their grievances.

Ioannis, the youngest brother, after a month at Port Said with his uncle Dr Karydis, arrived in Sydney when he was 13 and lived with his brother Mick in West Maitland, where, for lack of English, he had difficulty in studying at school. When
Mick sold his cafe and moved to Sydney, Ioannis went to brother Nicholas in Tamworth, where he had a happy year at the local convent school.

Nicholas meanwhile had taken in as partner another brother, George, who had landed in Sydney in 1907.

In 1910 Charles, Mick and Emmanuel, joined by John, moved Andronicus Brothers from York Street to 197 George Street, where three of them lived in rooms over the shop. Young John was instructed in the techniques of tea and coffee blending and of packing goods for dispatch.

Mick returned to Greece and in 1912 Nicholas and Antigoni settled in Sydney, where Nicholas managed the Marathon Cafe at 72 Oxford Street. George Andronicus then joined forces with a cousin, Georgios Potiris (who had come to Australia in 1902 and had worked at Barraba), and bought the large Apsley Hotel in Walcha, which they managed until 1919.

Now 19, John Andronicus helped Emmanuel with up-country sales, working the towns near the Queensland border. With his friends John and Antony Notaras he went fishing and shooting at weekends, and on one such excursion his rifle accidentally discharged. The bullet passed close to his heart but John Notaras got him onto a horse-cart and into Grafton, where Dr Page (later Sir Earle Page of the Country Party) operated on him and saved his life; and after three more operations in Sydney he recovered.

After early difficulties, and by prodigious efforts, Andronicus Brothers prospered and its partners played important parts in the Greek community.

Other Andronicus relatives also arrived in Australia before 1915, including Stylianos, who partnered his brother-in-law Panayiotis Kominos in shops in Lismore and Muswellbrook and in a cattle property, and Kharalambos, who had the Club Cafe in Toowoomba.

Another cousin, Mikhail Potiris, who, like his brother George had been persuaded by an Andronicus to leave Mylopotamos for Australia, worked with George Potiris in Barraba and later had a shop in Queanbeyan, but sold it in 1914 and eventually became the second Australian Greek to graduate in medicine".

Kosmas also helped write the seminal book, Life in Australia. The Neos Kosmos review of the book, focuses on the Andronicus family:

The First Page of History.

A recently released facsimile of Life in Australia,, the first book ever published about Greeks in Australia, provides a rich insight into the individuals who shaped the Greek community at the start of the last century.

It is incredible to think that these men in an alien land, took the time to write a book which would assist new settlers from Greece to adjust to the Australian way of life. - George Poulos -

A genteel young man in high starched collars looks out of an inky photo with an enigmatic Mona Lisa smile across his face.

This is 1916 and people rarely smiled for the camera, but this young Kytherian, Kosmas Andronikou, or Andronicus, the successful coffee merchant, has established himself along with his brother Emmanouil in Sydney as flourishing businessmen.

Life in Australia,, the first ever book to be published in Greek in Australia is now available in English for the first time, due to the Kytherian community and Sydney businessman John Comino.

The Andronicus brothers along with fellow community member Georgios Kentavros are the co-authors of Life in Australia.

If nothing else is a compelling first chronicle of Hellenic involvement in Australia and an important snapshot of life in Australia in 1916.

While the mass of Greek immigrants arrived in Australia between 1949 - 1971, Kytherians began settling in NSW at the end of the 1800s.

A keen entrepreneurial spirit founded on mercantile traditions assured many of them economic success and a leadership role in Australia’s nascent Greek community.
The Andronicus’ “trading house” is described in the book as, “the centre of Hellenism, particularly for Kytherians.”

“It is incredible to think that these men in an alien land, took the time to write a book which would assist new settlers from Greece to adjust to the Australian way of life, “ said George Poulos, Co-Chairman of the book’s Launch Committee, to Neos Kosmos English Edition (NKEE).

Very few original copies of the the book existed prior to the Kytherian community, along with sponsors, taking on the task of reproducing Life in Australia.

Original copies are held in very few libraries arounf Australia, and are valued at over $6,000.

The book is a fascinating mix of almanac facts ranging from the demographic population of “white Australians”, facts on husbandry, legal information as well as biographical entries on Greek settlers.

Given who wrote the book, there is no surprise that there are entries which sing the praises of the Andronicus brothers.

As the book writes; “They, [Andronicus Bros.], possess considerable property in the form of shops, whilst their trading house might be better described as a house of trust and hospitality.”

Throughout the book there are references to the “patriotism and generosity” of prominent Greeks”, something Mr Poulos explains as being as a reaction to the racism and jingoism of Australians, and their concern about the loyalty of the early Greeks.

Greece had yet to declare its hand during the Great War. The Greek Royals, being related to the German monarchy, and Greece’s ‘neutrality’ were making things quite “tense for Greeks in Australia, until Greece sided with the Allies and Turkey with Germany” Mr Poulos said to NKEE.

Life in Australia, with its emphasis on “virtues such as hard work, honesty, diligence and civic duty,” was critical in assisting new arrivals from Greece to assimilate, according to Mr Poulos. “It helped to convince prospective Greek immigrants that they would quickly enjoy a very good life in Australia”, said Mr Poulos.

Clearly a healthy level of self aggrandisement is evident in the book, “Just as their trading house should be named The House of Confidence, so should the General Manager, Mr Kosmas Andronicus, be named the guiding intelligence of most Greeks in New South Wales.”

The 368 page book details the state of the Greek communities in 1916 and provides about 150 pages of biographies and photographs of Greek immigrants.

Many Australian families will recognise great grandparents, grandparents and other relatives in these pages.

“An extensive 2009 Epilogue has been added in order to outline events surrounding the period of its creation” said Mr Poulos.

Life in Australia does ensure that the descendants of a pioneering generation of Greek immigrants are aware of their achievements while gaining primary insight into this historical period.

These two impressive volumes are available for sale in Greek and in English.

To get yourself a copy, Contact George Poulos by email