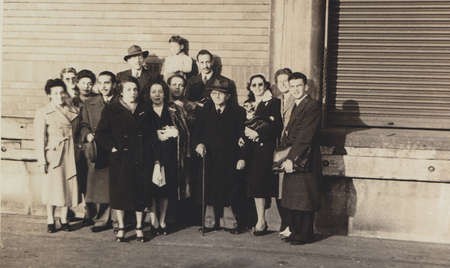 In 1945 Diana had met an American George Rudkin doctor of marine biology, during his leave from Townsville where many Americans were stationed. They corresponded when he returned to America and proposed marriage. She accepted and prepared for a new life in another country. She left Sydney Australia in 1946 and many members of the family went to the boat to see her off.

Diana is standing third from the right, next to Papou.

Diana (christened Diamantoula), was born in Sydney on the 4th August 1920,the youngest of five sisters and second youngest of the eleven children of George and Agapi Lianos from Kythera.

As can be seen in the photograph of the Lianos sisters. Daughters of George and Agapi Lianos, with Diana as a very young girl , Diana also had a flair for dressing up.

She grew up went to the East Sydney Technical College to learn dress designing. But she soon found a job in a dress factory instead. It was nothing for her to take a length of material and drape it around herself, pin it into shape with large safety pins and with smart shoes and handbag was ready to go out and party with her friends.

She joined The Metropolitan Younger Set and organised a Ball and Mannequin Parade in aid of the Red Cross Society that was held in the Banquet Hall of the Hotel Australia on the 14th January 1941. Her brother Anthony was the Secretary and her sister Aspacia Sophios, a beautiful singer was on the programme. Diana was one of the mannequins.

Part of the programme of the Metropolitan Younger Set Ball and Mannequin Parade, 1941

Download the 5-pages of the Programme as a .pdf:

Diana continued working in fashion and did charity work with the Metropolitan Younger Set, and was named Miss Australia Legion in the Miss Australia Contest in 1946. Previously in 1945 she had met an American George Rudkin doctor of marine biology, during his leave from Townsville where many Americans were stationed. They corresponded when he returned to America and proposed marriage. She accepted and prepared for a new life in another country. She left Sydney Australia in 1946 and many members of the family went to the boat to see her off.

In the photograph you see, that heads this entry, Diana is standing third from the right, next to Papou.

On her arrival in America where she was met by George they immediately travelled to Philadelphia where arrangements were made for their marriage. It was a very small affair at the Registry Office with no family or friends available at such short notice. It was their day and they were very happy.

And so began her life in America.
Within six months of her arrival she had formed the Australasian Women's Club (originally the Australian Women's Club) and later became the State President of the Pennsylvania branch of the Daughters of the British Empire. It was a new world to the new war brides and many were frightened and anxious. Some suffered real hardship at first and were very disillusioned. The Members, mostly Australian and New Zealand war brides who had settled in well, helped in any way they could financially or with other problems. Over the years most were comfortably settled with their own homes and cars. Now days besides being a social group, the Club still works for various charities in America.

George became a scientist with the Institute for Cancer Research in Philadelphia and soon after their marriage he was invited by the Nobel Institute to further his research at the Karolinska Institute in Stockholm. Not to be idle,Diana opened the first International and Modelling School in Sweden. It was more a finishing than a modelling school where the girls were given lessons in hostessing,voice production and wardrobe planning. Diana made sure that the teachers were all experts in their field.

In 1960 she made her first trip home to Australia and spent many happy days catching up with members of her brothers and sisters and their families.

George in the meantime was in Paris where he was to be the guest speaker at the first international meeting of the Histo-Chemical Society. Before returning to the U.S.they visited Stockholm for the 12th anniversary of the school she founded,which was now under the direction of Count Olderman-Cronstadt. On returning to America she was asked by a travel agency to advise women on wardrobe planning for overseas travel and was offered a job at the agency.

During all these years Diana still managed to have four children,one girl and three boys. On her first trip home to Australia she took the two eldest Liana and Charles with her,and the other two boys Robert and Brian stayed at home with their father.

In 1965 she made another trip to Australia while doing a world trip this time with Robert and Brian.Her father had died suddenly in 1962 and she was unable to reach Australia in time. George continued his research into cancer at the Research Centre in Philadelphia, and Diana opened a small travel agency with a cardboard cut-out of a kangaroo in the window. The children all completed higher education. Robert and Brian followed their father into research, Liana into finance, and Charles into the high tech field.
Children of George and Diana Rudkin (nee Lianos). Philadelphia. U.S.A
In 1985 George took Sabbatical leave and came to the C.S.I.R.O. in Sydney Australia. Diana came with him and spent time with members of the family remaining after the deaths of sister Stella and brothers Menas and Emanuel. They stayed with Anthony at his home in Killarney Heights,and she insisted that she come and help me at my pharmacy at Waverley. She certainly made her presence felt and fascinated the customers and my staff by her sometimes imperious stage manner (she would have made a great actress) but everyone laughed and loved it.

George and Diana celebrated their Ruby wedding anniversary at Uncle Tony's home and what a night it was. Everyone who was able to came -- aunts,uncles, nieces and nephews many who were married and had their own children.

One evening George and Diana were invited to a formal dinner given by the C.S.I.R.O, so it was full dress for both of them. Towards the end of their trip a party was held at my mother Theodora's house at Rose Bay, and it was great for all to be together again. But this was to be their last trip to Australia.

This photograph was taken at the farewell party for Diana at Margetis family home, Rose Bay, Sydney.

In the early part of 1990 George died suddenly. Diana was heartbroken and could not be consoled and she too died suddenly on 6th of September in the same year 1990.