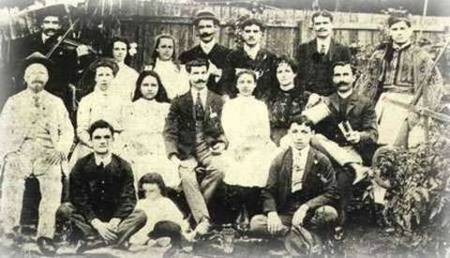 Maria kindly allowed me to publish this photo in the interest of identifying the culprits. The very handsome bloke sitting on the ground at left is the spitting image of my yet unborn father. His father, George Spiro Tsicalas, was supposedly on the Tablelands in 1916, aged 36, and, according to family folklore, didn’t come back to the Northern Rivers until 1917. But…you never know?
Known to be in Lismore in 1916 were:
Peter Emmanuel and Kalliopi (nee Andronicos) Comino (aged 46 and 38), with their children Stella (19) and Muriel (17), living in North Lismore, but also with a residence on their farm at Nimbin.
Emmanuel Dimitrios Notaras (24), Nick Harry Flaskas (21) and George Hlentzos (40) at the Olympia Café in Molesworth St.
George Poulos (32), (but probably the same George Theo Georgopoulos, or Tzortzopoulos, aged 23 in 1916, who married Zafiria Dimitrios Crethary 1929 Lismore with Dorothy Poulos of Cobar as bridesmaid), Nick Poulos (35), Zenah Poulos (22) and John Prineas (17) at the Busy Bee café (and possibly the Canberra café at the time) in Woodlark St.
Possibly:
Peter Nick Theodore (10) who went to Muswellbrook, probably with his parents, in early 1916.
Archie Panaretos (23) who went to Mullumbimby around early 1916.
Mick Catsoulis (34), the son of Charles and Marigo, nee Panaretos, who established a wholesale fruit business in Woodlark St around late 1916.
Peter Harry Flaskas (18) who came from Maclean, and Harry James Flaskas (22) who came from Cowra, around late 1916.
Harry Angelo Logus (24) who supposedly left the Olympia in 1915/16 and went to Musswellbrook with the Andronicos Bros.
Athena Andrulakis/Lakis (Ithacan aged 48) who owned a couple of shops in Woodlark St, but was at Bangalow in 1916 when she married a fellow Ithacan, Conis/Ionis Vervorakis (23). Her Aust born son, Con/Foiti, was probably minding one of the Lismore shops. Another son, Harry (21), with wife Cecila, was somewhere around the place.
Paul Spiro Coronakis, aged 26 of Corfu, was also around the place somewhere. He took over the Canberra café, one of the Poulos cafes, an ex Andrulakis shop, in 1919/20.

Residents from Casino, Ballina, etc, also may have been present for the get-together. Other known females and children around in 1916 were Cornelia Cordato (nee Chambiras), aged 30, and children Catherin (6), Hariklia (5) and Emmanuel (3), of Casino, and Anthie Minucoe of Kyogle (married Tony Cordato 1916 Casino.)

I’m in the process of identifying all the Greeks in this neck of the woods, so I’d be grateful for anybody taking a stab at putting names to faces.