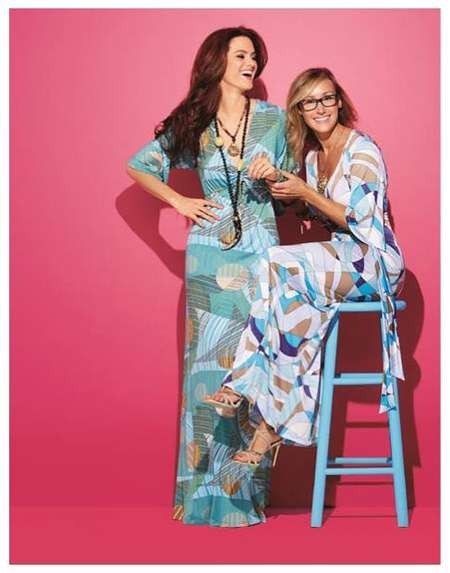 "There is a certain free-spirited and organic nature in my creative process which believe is a reflection of my Greekness."

Greek Australian fashion designer Nikki Poulos shot to fame after appearing in the first season of US hit reality TV show Fashion Star. The Florida-based designer wooed the mentors with her bright, bold prints and organic designs for day to night wear. Her style on the show demonstrated her glamorous yet simple approach to fashion that saw her at the top of her game on the show. Yet when this designer was a young girl, fashion and flair were far from reach.

Nikki was born in regional New South Wales, in the town of Wagga Wagga. Her grandfather migrated to Australia from Kythera and her grandmother from Akrata. Growing up on a 54,000 acre cattle farm in the outback, with no electricity and hence, no television, Nikki was obligated to use her imagination even more than children her age. She would read and read and imagine life elsewhere, somewhere exotic, a big city, and that thirst drove the young woman to reach for her very own fashion star.

Inspired by her mother's passion for creativity, Nikki was exposed to vivid colours through wallpapers chosen to redecorate the house. She would spend hours watching her mother make clothes for the family, then at age eight, Nikki got her first ever sewing machine.
"The first thing I made was a bikini - even though I lived miles and miles from the beach," Nikki tells Neos Kosmos.

After leaving high school, Nikki studied sewing and technical pattern making at the Sydney Technical College. After travelling around Europe, it would be the birth of her sister's child that would see her organic and ecologically friendly style of design take over. With the baby as her muse, Nikki went off to create a whole collection of eco-friendly baby clothes, aptly named 'eco-baby'.

"The collection was made of organic cotton printed with my designs in non-toxic inks," explains Nikki.

She began selling the clothes at the Bondi and Paddington markets and noticed with her success, there was a definite gap in the market for this style. With her confidence growing, she called the baby clothes buyer for David Jones and was invited in to show her collection.

"I made about a dozen pieces in three weeks - put them on wooden hangers and displayed them in a vintage suitcase," says Nikki of the early days, "and the buyer loved the collection."
Not only was 'eco-baby' born, but so was Nikki's career as a designer and she was only 23.

But it was her love affair with the ocean that led Nikki to pursue a career in marine biology and her Bachelor of Science degree and a scholarship opportunity brought Nikki to US shores. Working in coral reef conservation, Nikki juggled the dichotomy between science and fashion; ultimately her creativity lured her back to the fashion world.
Based in Florida, Nikki started creating under her label 'nikki poulos' in 2008 and has built a loyal following with her clientele and the press, having been featured everywhere from Sports Illustrated Swimsuit Issue, Elle, Lucky and Fitness magazines, and the European version of the hit show Next Top Model.

"I am a print obsessed designer," says Nikki of her style, "and my collection reflects my love of graphic prints, bold colours, and vintage-inspired styles; especially the 1930s and 1970s."
She adds that her fascination with bold prints is a reflection of her Greek heritage.

"Also there is a certain free-spirited and organic nature in my creative process which I believe is a reflection of my Greekness."
But with that, the designer also loves the glamour of old Hollywood.
"A fascination with old Hollywood glamour and the icons of fashion, film and art, coupled with my love of the great outdoors, inspires and influences my styling to create a line that represents the epitome of modern bohemian chic."

With her marine biology background, and given her first piece made was a bikini, it's easy to see this designer's love of swimwear.
"There's a lot of leeway when you work in stretch fabrics," says Nikki of creating swimwear.

"I think the hardest thing with swimwear is getting the proportions right - 1/4 of an inch can make the world of difference when you're working on a small scale. That's the secret to designing swimwear that flatters the body."

Even though her label has been going for over five years - featuring pieces from jumpsuits to resort wear and her favourite maxis, the designer made waves in the country where she was born when she popped up on the telly last year.

"Fashion Star was an amazing experience," she says of her time on the NBC hit US reality TV series.

Filmed over five weeks in Los Angeles, the aim of the show is to sell as many designs to the three stores and eventually get a whole collection stocked in either Macy's, Saks Fifth Avenue and H&M, however, H&M has been replaced by Express for season two.

"The show was incredible for my business," Nikki starts, "it was seen by four million viewers weekly plus was shown in 70 countries worldwide.
"For an independent designer to reach such a large audience week after week is a phenomenal exposure opportunity. My website traffic increased from about 10,000 hits per month to 80,000 hits per month. Plus, it has given me a fantastic following with real women who respond to and relate to my designs."

Nikki's designs sold the fastest out of the other 14 designers on the show, with H&M's website crashing twice within two minutes when her dresses were on sale. Not only that, her designs sold out in under ten minutes.

"To sell so many pieces in less than ten minutes is an incredible feat - one of which I am incredibly proud, but more so, it gives retailers and consumers the confidence to purchase my designs."

And now the designer has launched a new line exclusive to the Home Shopping Network (HSN) http://www.hsn.com/shop/nikki-by-nikki-poulos-fashion/fa-10881

"The launch was the best selling launch of a new brand in the time slot in HSN history. The launch was supposed to be 3 hours spread over one day but we sold so much in the first hour that the producers had to cancel the second hour to reshuffle the merchandise so we could sell in the third hour. Unheard of for a new brand launch."

Nikki Poulos just keeps going from strength to strength in the design world - not bad for a Greek Australian girl from the outback.