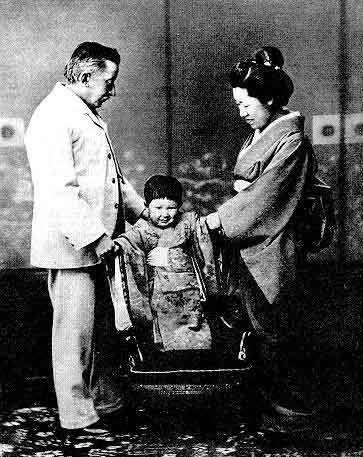 Lafcadio Hearn's biography has been related extensively both on the Message Board, and as a separate entry in Vintage Portraits/People.

His mother, Rosa Antonia Tessima Cerg Kassimatis (Cassimatis) was born in Kythera in 1823.

For further information kythera-family.net users are referred to

The following is a succinct biography published by thefreedictionary, at

Hearn was born in Leucadia (pronounced Lefcadia, whence his name, which was one adopted by himself), one of the Greek Ionian Islands He moved to Dublin, Ireland at the age of 6. He was the son of Surgeon-major Charles Hearn, of King's County, Ireland, who, during the English occupation of the Jonian Islands, was stationed there, and who married a Greek wife. Artistic and rather bohemian tastes were in Lafcadio Hearn's blood. His father's brother Richard was at one time a well-known member of the Barbizon set of artists, though he made no mark as a painter through his lack of energy. Young Hearn had rather a casual education, but was for a time at Ushaw Roman Catholic College, Durham.

The religious faith in which he was brought up was, however, soon lost; and at 19, being thrown on his own resources, he went to the United States of America, and at first picked up a living in the lower grades of newspaper work in Cincinnati.
The details are obscure, but he continued to occupy himself with journalism and with out-of-the-way observation and reading, and meanwhile his erratic, romantic and rather morbid idiosyncrasies developed.

He was from 1877, in New Orleans, Louisiana writing for the Times Democrat. His writings about New Orleans focused on the city's Creole.
His writings for national publications like Harper's Weekly and Scribner's Magazine helped mould the popular image of New Orleans as a colorful place of decadence and hedonism. His best known book on Louisiana is Gombo Zhebes.

The Times Democrat sent Hearn to the West Indies as a correspondent in 1889. He spent two years in the islands and produced Two Years in the French West Indies and Youma, The Story of a West-Indian Slave (both 1890).

In 1891 Lafcadio Hearn went to Japan with a commission as a newspaper correspondent, which was quickly broken off. It was in Japan, however, that Hearn found his home and his greatest inspiration.

Glimpses of Unfamiliar Japan (1894 )
Kokoro: Hints and Echoes of Japanese Inner Life (1896)
Gleanings in Buddha-Fields: Studies of Hand and Soul in the Far East (1897)
Exotics and Retrospectives (1898)
Japanese Fairy Tales (1898) and sequels
In Ghostly Japan (1899)
Shadowings (1900)
A Japanese Miscellany (1901)
Kottó: Being Japanese Curios, with Sundry Cobwebs (1902)
Kwaidan: Stories and Studies of Strange Things (1903)
Japan: An Attempt at Interpretation (1904; published just after his death.

During the 1890s, he became a teacher of English at the Tokyo Imperial University, and soon fell completely under the spell of Japan. He married a Japanese wife, became a naturalized Japanese under the name of Yakumo Koizumi, and adopted the Buddhist religion. His health was failing for the last two years of his life and he was deprived of his lecturership at the University.

In the late 19th century Japan was still largely unknown and exotic to the Western world. With the introduction of Japanese aesthetics, however, particularly at the Paris World's Fair in 1900, the West had an insatiable appetite for exotic Japan, and Hearn became known to the world through the depth, originality, sincerity and charm of his writings. In later years, some critics (such as George Orwell) would accuse Hearn of transferred nationalism and exoticizing Japan, but as the man who offered the West some of its first insights into pre-industrial and Meiji Era Japan, his work still offers valuable insight today.

Elizabeth Bisland, The Life and Letters of Lafcadio Hearn (2 vols., 1906)

Glimpses of an Unfamiliar Japan _ Second Series
by Hearn, Lafcadio
Released: May 2005

In Ghostly Japan
by Hearn, Lafcadio
Released: May 2005

Japan: An Attempt at Interpretation
by Hearn, Lafcadio
Released: Jun 2004