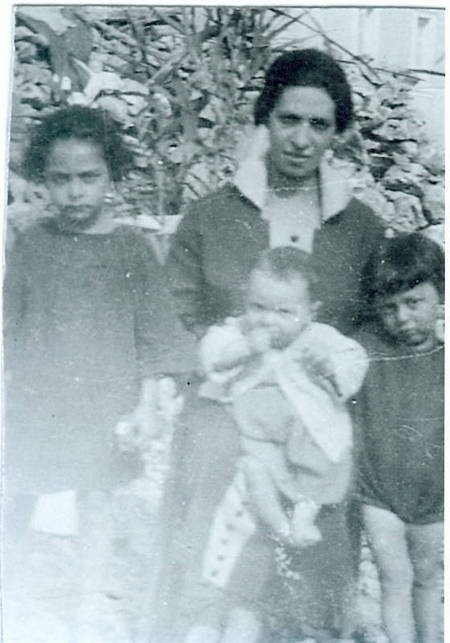 In this photo is Marietta Logothetis and her three children Despina (left), Aristoteles (middle) who died as a baby from pneumonia, and Leonidas (right).
Marietta was the only child of Minas and Katerina Logothetis of Logothetianika.

Marietta was orphaned at 13 or 14 years of age. Her divorced parents, Minas and Katerina, both lived in Piraeus, until their deaths (6 months apart) in the early part of the 20th century, possibly around 1910. Marietta was educated at a French Catholic Convent school in Pireaus (name unknown), run by French nuns. Marietta's mother, Katerina, was half Italian and her maternal grandmother, (name unknown), was originally from Naples, Italy. Marietta's maternal grandfather was a ship's captain.
Following the divorce of her parents, Minas Logothetis asked his now ex-wife, Katerina, for custody of his only child. When Katerina refused to hand over her child, Minas disinherited his daughter, Marietta, and never saw her again.

Marietta did inherit her mother's jewellery, all of which was stolen from the marital home by burglars on Andros, where her husband, Pavlos was stationed in the Greek Royal Navy, possibly in 1921. When Pavlos died, Marietta was forced to find work: she trained as a Physiotherapist and, subsequently, lived and worked in Athens at the Evangelismos Hospital. She lived mostly with her husband's young aunts and uncles, who were members of the Kourtis family. Marietta's best friend (name unknown), during her working life, was the matron of the hospital.

Following her parents' death Marietta lived with relatives in Piraeus. She had a first cousin called Alkioni Combis and it was Alkioni's parents who became Marietta's guardians, until her marriage at around the age of 17 or 18 years. Alkioni married a judge and went to live on one of the islands in the Dodecanese with her new husband. Contact with family members from Kythera was limited following Marietta's marriage to Pavlos Pavlou.

Minas Logothetis, Marietta's father, was born around 1846 and as an adult, had a factory in Piraeus that processed waste material from the dock areas where he lived with his family. It is believed that the Logothetis family built a church in Logothetianika, Kythera.

Marietta's daughter Despina Mudie, (nee Pavlou), now 90, lives in England near her eldest daughter, Laura Pavlou-Mudie. Despina, Laura, her sister, Moira and first cousin, Pavlos, would be most appreciative to learn about their Kytherian heritage. If the names, events, and place above are at all familiar to anyone reading this, please contact Laura with information.

email Laura by clicking on this link: Laura Pavlou-Mudie