My mystery rash was a cancer 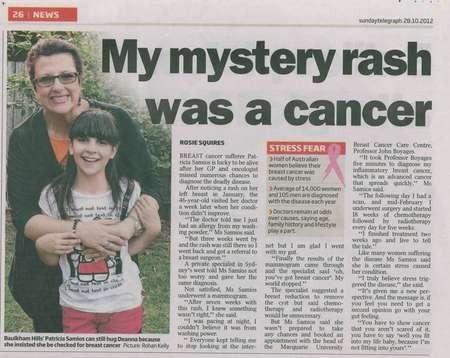 Breast cancer sufferer Patricia Samios is lucky to be alive after her GP and oncologist missed numerous chances to diagnose the deadly disease.

After noticing a rash on her left breast in January the 46-year-old visited her doctor a week later when her condition didn't improve.

"The doctor told me I just had an allergy from my washing powder," Ms Samios said.

"But three weeks went by and the rash was still there so I went back and got a referral to a breast surgeon."

A private specialist in Sydney's west told Ms Samios not too worry and gave her the same diagnosis.

Not satisfied, Ms Samios underwent a mammogram. "After seven weeks with this rash, I knew something wasn't right," she said.

"I was pacing at night, I couldn't believe it was from washing power. Everyone kept telling me to stop looking at the internet but I am glad I went with my gut. Finally the results of the mammogram came through and the specialist said, 'oh, you've got breast cancer'. My world stopped."

The specialist suggested a breast reduction to remove the cyst but said chemo­ therapy and radiotherapy would be unnecessary.

But Ms Samios said she wasn't prepared to take any chances and booked an appointment with the head of the Macquarie University Breast Cancer Care Centre, Professor John Boyages.

"It took Professor Boyages five minutes to diagnose my inflammatory breast cancer, which is an advanced cancer that spreads quickly," Ms Samios said.

"The following day I had a scan, and mid-February I underwent surgery and started 18 weeks of chemotherapy followed by radiotherapy every day for five weeks.

"I finished treatment two weeks ago and live to tell the tale."

Like many women suffering the disease Ms Samios said she is certain stress caused her condition.

"I truly believe stress triggered the disease,"she said. "It's given me a new perspective. And the message is, if you feel you need to get a second opinion go with your gut feeling.

"You have to show cancer that you aren't scared of it, you have to say ‘well you fit into my life baby, because I'm not fitting into yours’."

) Half of Australian women believe their breast cancer was caused by stress.