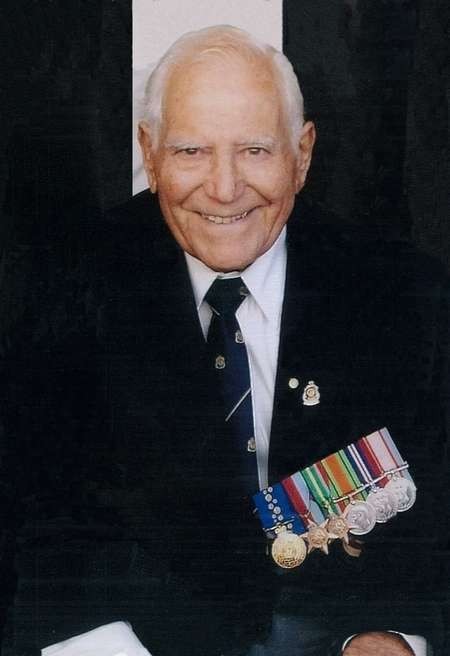 Nicholas Peter Careedy, the fourth child and only son of Peter and Marietta Careedy, was born in Mylopotams, Kythera on the 1st of March 1912. After completing high school in Kythera he remained in his village until he left for military service. He spent the first six months of service in the recruiting office of the 31st regiment in Athens and then in the office of the Military Academy. When he was discharged from the army, Nick completed a bee-keeping course, establishing his own business in Mylopotams; however the economic state of the 1930s forced him to migrate to Australia.

Nick arrived in Toowoomba on the 10th of January 1937 and worked in his brother-in-law, Harry Andronicos’ café. He became involved with the Greek Community’s Kytherian Association in Toowoomba and served on the committee for eight years. He was also on the organising committee of the Greek War Relief Fund.

When Japan bombed Darwin in February 1942, although still a Greek national, Nick enlisted in the Royal Australian Air-Force. He served for 3 ½ years in the security division and saw active service in Darwin and New Guinea. After he received his discharge he went to Goondiwindi for 12 months and then to Toowoomba where with Harry Andronicos opened a drapery business.

From 1946 he was a member of the RSL, eventually forming a Hellenic Sub-Branch. He became the foundation President and served for thirteen years. He was also given life membership in 2001 and a certificate of merit for his service. In 1951, he moved to Brisbane where he opened a frock salon in the city, became treasurer of the Greek Red Cross and a member of the Greek community.

In 1954, he joined AHEPA where he served as National Supreme President and was honoured with Life Membership in 2004.

Nick received the ‘Multicultural Services Award’ from the Premier of Queensland in 1997. Three years later, he was honoured with the Order of Australia medal at Government House for his charity work.

This year Nick was honoured with Life Membership to the Greek community.

Although experiencing much in his life, his proudest moments were marrying Nina Kalafatas in 1963, the birth of their much loved only child Marietta, who with her husband Paul, have been blessed with two beautiful children Connie and Nicholas.

In 2003, Nick, Nina, Paul, Marietta, Connie and Nicholas all journeyed to Greece for 5 weeks where Nick proudly got to show his family his homeland. They even stayed in the house where he was born. This meant so much to him.

In 2007, with the assistance of Doctor Peter Marendy, $20, 000 was raised to build the War Memorial at Agia Paraskevi in Taigum, Queensland, officially unveiled on Remembrance Day. The olive tree, symbolising peace, was lovingly planted and tended by Nick. As it continues to grow, it is a reminder of Nick’s dedication to those who served in wars.

Nick was a fortunate man, living a long, happy life, which many of us got to celebrate earlier this year at his 100th birthday. Living to the grand old age of 100, Nick tended daily to his garden, loved to travel, and enjoyed fishing and lawn bowls.

Nick was also a religious man who enjoyed attending church on a regular basis. He and Nina would try to travel to Greece as often as possible to visit his relatives and friends in Kythera.

Nick led a full and happy life and is now resting in God’s care, watching over us. We will always be grateful to have had the opportunity for Nick to have been part of our lives. Nick will be greatly missed by all his family and friends. He was laid to rest on Friday 19 October 2012 at Agia Paraskevi, Taigum, Australia.

Extract from the eulogy recited by Steven Mallos, Brisbane.