submitted by Kytherian Biographies Project on 24.07.2012 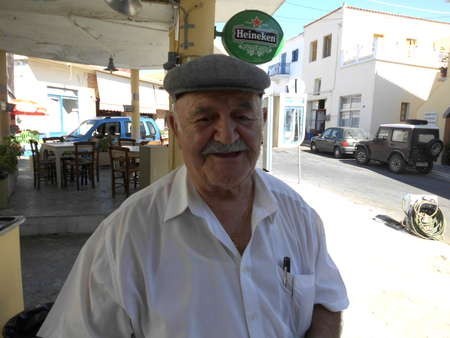 This one particular journey started for a young Kytherian boy Paul Theodore when he stepped on board a plane bound for Australia. The world war one twin engine bomber had been converted into a handy passenger plane, and had the capacity to hold approximately nineteen people including pilots.

With nothing but the clothes on his back and a bag a containing precious hand-knitted bed-spread his mother had made, he set off into the unknown, with sixteen complete strangers, four of whom where Greek, and the other, Italian.

The decision to move from Greece was agreed upon by relatives in Australia. After the death of his father, when Paul was only three, and then later, in his teens, the passing of his mother, he no longer had any strong family ties to anyone in Greece.

Australia offered new opportunities, a fresh start, and relatives that were very eager to see him.

So they were off. Young Paul left Greece behind, filled with hope and wondering what the future held for him.

They were welcomed by the sound of gunfire as they flew in to their first stop off point, Lydda. The next thirty-six hours in Jerusalem proved to be interesting. The image of rifles chained to airport guards in case of a sudden unsuspected attack, is one that has remained with him. In a place where such unrest is commonplace, this was not an unusual sight, but it was an alien concept, to the young stranger.

In the next seven days it took to reach Australia, the travelers stopped off twenty-one times. They flew over the Middle East, India, down through Malaysia, and then finally, to Australia. They found themselves confronting many interesting and challenging people and situations. Stories can be told of the Indian crow’s eggs breakfast, a brief encounter with a Malaysian swamp ‘rattler’, and pressed steel runway; but these will be conveyed at another time.

The passenger plane made it! They finally set down in Australia. The now weary and rather dirty young travelers had their first look at the country they would come to call home. The Darwin airport consisted of a tarmac runway, almost a molten liquid in the oppressive heat, a lonely tin shed, and a not so helpful local.

To be perfectly frank the first impressions of our fair Australia were not favorable; in fact young Paul’s first thoughts were that he had arrived in a sort of hell.

The journey continued. The next destination was Sydney, where Paul was to meet his aunty and uncle. Friendly faces greeted him as he came through Sydney customs. Family. After travelling in an ever-changing environment, seeing someone warm and familiar was a great joy and relief.

The Journey was over…..or was it?

Paul Theodore established himself in Australia, by working for his uncle in Crookwell. It was during this time that he learnt English. He asked questions, read Phantom comics and tuned into the daily Biggles episodes on the ‘wireless’. This was how he came to grips with the alien English language.

It was also at this time that he met his future wife, Mary. After a year of courting they were married on the 13th June, 1956, at the Holy Trinity Greek Orthodox Church, in Surry Hills.

Later he moved to Braidwood and opened the still very prosperous Royal Café. From there he moved to Canberra, were he ran the Blue Moon café. Throughout this time, the couple established a family – with their three daughters, Stella, Andriana, and Christina. Australia was now definitely home.

The journey hasn’t really ended. The transition from Greece to Australia is only part of a larger journey that carries on. Life.

For my Papou, Paul Theodore.