Perdis builds on his foundation 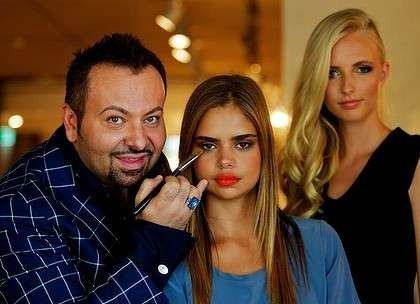 Photograph: Brush with fame ... Napoleon Perdis puts the finishing touches on model Samantha Harris’s make-up. Perdis says his products are for the woman on the street as well as the runway. Photo: Domino Postiglione

The colour king is expanding operations here and overseas.

Alexandria is literally a grey area of industry and business parks, an inner-city suburb on the way to the airport in Sydney. Then there is the head office of Napoleon Perdis make-up.

I enter a candy-striped foyer beneath a large and brightly burning chandelier and ascend a set of stairs to the pulsing beat of dance music.

In the reception area with flamingo-pink walls I take a seat next to the oversized tropical fish tank and peruse the latest fashion magazines, helpfully tabbed with every Napoleon Perdis mention and product placement, before the man himself is ready to meet me in the boardroom.

With peacock feather-print wallpaper and a slick white table and chairs, the space looks pretty good to me but apparently the vibe is not quite right.

''I'm about to get it feng shui-ed again,'' says Perdis, who - dressed all in black - materialises as the Johnny Cash of cosmetics against the vivid backdrop. ''I don't like to have energy being stagnant and I feel like as I'm getting older I don't want to get in the rut of people where they once felt the energy but now they don't keep up with the energy.''

With Napoleon Perdis employing a staff of 1000 in Australia and the US combined and distributing products to 5000 stores in both countries, 75 of which are stand-alone Napoleon Perdis outlets, I find it difficult to believe anyone could accuse Perdis of lacking vim and vigour.

''Well, I don't want stagnation,'' he replies. ''Energy is neither created nor destroyed, it's converted from one form to another. I like converting it to the form of what is the current taste of the nation today and the thing about the taste of the nation is people want to be living colourful lives.''

Perdis has been colouring people's lives since he opened a small shop on Oxford Street with a $30,000 loan from his father in 1995.

Since then, together with his wife and business partner Soula-Marie, the son of Greek immigrants who arrived in Australia in the 50s has built the business into a global concern comprising his core brand Napoleon Perdis and the more affordable NP Set line of make-up.

From today, NP Set is rolling out into Big W stores across the country, as part of Perdis's mantra of make-up for all.

''NP Set is about something for everyone that is beautiful, because there is no reason why a cosmetics company or a fashion designer - and I see myself as a make-up designer - should alienate any part of the female population. Because of what? Because of income? Just because you can't afford it, it doesn't mean I'm not happy to design something for you. In fact, I am and I'm going to work really hard for it.''

Perdis's pursuit of the mass market in Australia follows the recent expansion of his premium line Napoleon Perdis into American department store Nordstrom, which will eventually stock it in 80 stores and is also carrying the brand on its website, nordstrom.com.

The line is also getting a makeover with improved application techniques and formulas.

''When I was on [American shopping channel] QVC last week, my spray foundation was the big seller,'' he says. ''You've had these other spray foundations that just blurt out so you have to blend them with a brush but me with my little guy from the labs in Los Angeles, we thought, 'Why should you have to blend it with a brush? Why not just make it so the delivery does that?'''

You certainly could not accuse Perdis of false modesty but then neither, with access to 90 million households through QVC, could you accuse him of false pride.

Perdis splits his time between Australia and the US, where he has homes in the Hollywood Hills and Palm Springs and lives most of the year with Soula-Marie and their four children.

He believed the US was the most logical market when he launched his then embryonic brand overseas in 2006 but then the global financial crisis intervened.

''During the recession I pulled out of Saks Fifth Avenue because they were losing an enormous amount of money,'' he says.

''So I went to the west coast and set up two stores there and the concept store in Hollywood to give it a global positioning.''

Away from New York, Perdis focused on ''the four pillars of America: the south, the west coast, the north east and the midwest''.

Regional America allowed him to grow his brand through the philosophy of demystifying make-up: ease of application and co-ordinating colours are the chief selling points of Napoleon Perdis cosmetics, which all come with instructional tips and tricks aimed at connecting with the woman on the street as well as the woman on the runway.

In town to oversee the make-up at stockist David Jones's autumn-winter collections launch last night, Perdis was as enthused about meeting a customer at the Qantas baggage collection area as he was about putting the dabbing touches on Miranda Kerr for the DJs show.

''When I was coming back [to Australia] from LA I was waiting for my baggage and a lady came up to me and said, 'I love your foundation, am I doing it right?''' Perdis says. ''I said, 'Thank you for letting me know and you know what? You look fantastic!' What does she want from me? She wants me to keep delivering.''