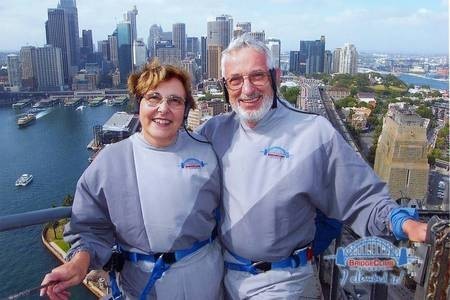 Peter is an Irish-Australian - who is "obsessed" with Kythera, Kytherians, Greeks, and Greece - to a point where he is "more Greek than the Greeks."

George arrived in Australia in 1901, and with brother Peter Phacheas, and a nephew Alexander, settled in West Maitland.

They established an oyster saloon in the newly ermerging town of Kurri Kurri, remaining there until c 1920, when they moved to 23 Renwick St, Redfern - only about 100 metres from the Cathederal in Cleveland Street.

Only a small number of Fatseas used the Phacheas translation, and all are closely related.

This name has been lost in Eastern Australia due to a lineage of daughters, and only a small group remain in Western Australia, which have evolved to Phaceas.


To all Kytherians, Australians, and overseas visitors to Sydney, be advised that the Bridge Climb is a great experience, which shouldn't be missed.

My family's present to me on my fiftieth birthday was a "climb", and it was the best Birthday present I have received in my life.

For more information on the Bridge Climb go to,