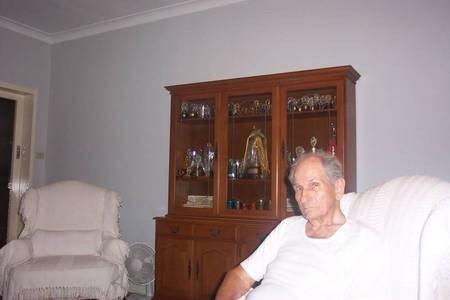 He left as a 12 year old, migrating to Australia.

Like so many other boy immigrants to Australia, he never saw his mother again after his departure. His mother died during WWII. Peter blames the the German occupying forces for her death. He claims that at a time when she was very sick, the occupying forces chose to withold medicines from her.

This was the Acropolis Cafe - owned by two other Kytherians, Manoli Kepreotes and Peter Veneri - who later moved to the "famous" Acropolis house and acreage in Wyong [where incidentally, the author George C Poulos spent many wonderful summer holidays as a young boy.]

Peters' business history, in a more comprehensive format, can be found under Photography Diaspora - subsection - Cafes and Shops. Search under Venardos for numerous other entries.

His contribution to the town of Gunnedah has been profound. After a Kytherian drowning tragedy, during a picnic on the Namoii River, involving his nephew, Peter was instrumental in mobilising the town to provide Gunnedah with its large and sophisticted community swimming pool. Many individuals and businesses in the town provided both equipment and labour for the project, free of charge, to ensure that all children in the town had a safe place in which to swim, and to provide a facility for swimming lessons within the town. A very important community resource, derived from a Kytherian tragedy. [See separate entry for photograph of Gunnedah Pool.]

In his honour, a street, and a carpark in Gunnedah have been named after him.

In the background of the picture can be seen a large Trophy Cabinet.
It contains most of the trophies won by Peter's son George Vernados as a young man.

A second Trophy Cabinet on an adjacent wall of the lounge room contains all the trophys won by his second eldest son, Jimmy.

The youngest son Paul, was also a good sportsman.

George was an exceptional swimmer, and Jimmy an all round sportman, excelling in "golf, tennis, Aussie Rules, soccer, ...you name it!"

Participation in sport was highly encouraged in the Venardos family.
"You got to learn to take a few knocks....".

"They got to play sport. That was my story...and they thanked me for it!"

George is currently a very senior member of the Executive Team of the NRMA, a very powerful Corporation in the state of New South Wales.

It would be great if one of the children or grandchildren could furnish us with the continuing history of the Yaloupos soi.

Although George Souris's (member of NSW Parliament - See entry under People - subsection - High Achievers) father was initially a Member of the Australian Army in Sydney during WWII, he later went to Tamworth to be with his brother Con (now of Kogorah) and my mother's brothers and two sisters operating the Golden Bell Cafe. Later he and Peter Venardos moved to Gunnedah where they operated the Acropolis Cafe for many years.