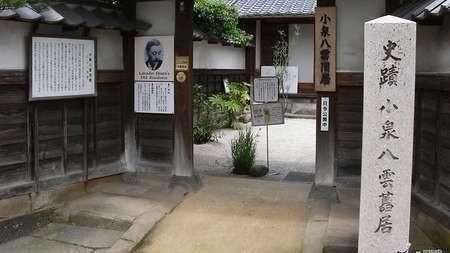 The former residence of writer Lafcadio Hearn in Matsue.

These days the name Lafcadio Hearn is mostly known only to people who have read You Only Live Twice: "Have you ever heard the Japanese expression kirisute gomen?" Blofeld asks Bond. "Spare me the Lafcadio Hearn," replies our hero (the term approximates to "licensed to kill").

But in the small city of Matsue in southwest Japan this past September, the name of this baggy-trousered travel writer was on everyone's lips.

Standing in the grounds of the old castle (apparently the second-largest, third-tallest and sixth-oldest in all of Japan), I found myself accosted by two people in samurai costume. Both assumed that I must be looking forward to Lafcadio Hearn Day.

It is not so unusual to meet armoured samurai in tourist sites such as Matsue. They are employed by the city and are usually very friendly. "Come and take my photo!" they cry. "No charge!" But it is unusual to find them so emphatic that they know best.

"You must know Lafcadio Hearn," said one called Shiomi, posing with his fierce-looking blade. "He was an Englishman from Ireland but he chose to live here and write about Matsue."

In fact, Hearn was born in Greece in 1850, and his father was Irish. His mother, Rosa Kassimatis was from Kythera. After he was abandoned by his feckless parents at a school in Ireland, Hearn lost his left eye in a playground incident in his teens. As a result, he only ever allowed photographs taken from his sighted side, head ducked down in shame.

He enjoyed two nationalities until 1891, when he took the name Koizumi Yakumo -- and Japanese citizenship -- on his marriage to a samurai's daughter. Hearn, who had travelled Europe, America and the Caribbean in search of a home, finally settled.

For the last 10 years of his life, he poured out his feelings for Japan in 15 books of stories, memoirs and explorations of Japanese myths. He was one of the first travel writers to represent Japan to the West in English; but I had no idea that he was so big in Matsue.

For anyone that remembers the TV series Shogun, Matsue Castle is a dead-ringer for Toshiro Mifune's Hikone.

"Vast and sinister in shape," Hearn wrote of it. "Fantastically grim the thing is . . . and grotesquely complex in detail, crested at its summit, like a feudal helmet, with two colossal fishes of bronze lifting their curved bodies skyward . . . the creation is a veritable architectural dragon, made up of magnificent monstrosities."

As I walked downhill from the keep, past an old pond used for washing samurai horses and the Gokoku Shinto shrine that honours dead warriors, a sign told me that I was walking the Lafcadio Hearn Way, so named because this used to be his walk to and from the castle. It's a leafy, gentle lane down to the vast square moat that surrounds Matsue Castle.

I crossed two lovely reconstructed old bridges straight out of a willow pattern plate, as one of the pleasure boats that circle the moat went by, full of Japanese tourists. Apart from the laughter of a pair of passing Japanese schoolgirls and the putt-putt of the boat riding low in the water, the place felt very quiet, sleepy even.

At the main road, I'd intended to go left to Ichibata, an informal restaurant on the other side of the moat where you barbecue your own meat. But my eye was caught by a row of single-storey buildings with black roofs and the flags leading towards them. Each showed the same line drawing of Hearn on his travels -- baggy linen jacket, crumpled panama and suitcases in hand.

Crossing the road, I found that the first wooden building was the Lafcadio Hearn Memorial Museum. Next to it lay his old home: beyond that, an art gallery. They were comfortable, modest traditional structures, like small versions of the pan-tiled samurai houses I'd seen elsewhere in Japan.

Inside the four square rooms of the home, Hearn's high desk and low chair are on display. He had to write with his head pretty much level with the desktop because his eyesight was so bad he needed to be very close to the paper.

In the museum next door, there was a display of memorabilia celebrating the 1965 Japanese film Kwaidan, which was based on four of his Japanese ghost stories. Evidently, it was commended at the Cannes film festival in France that year and nominated in the US for an Oscar.

I also discovered that every year on the anniversary of his death on September 26, 1904, Matsue celebrates Lafcadio Hearn Day with recitations and a haiku competition. Hence the excitement from the local samurai. On the way out of the museum, a phrase from Hearn's had been attached to the wall by his Japanese great-grandson, Koizumi Bon.

"Those who can survive are the ones who can co-exist with nature and live the simple life."

Koizumi Bon asked us to remember this when we think of "the East Japan earthquake", as it is called here.

Over the road, a bust of Hearn has been erected. While the West has forgotten the writer, this gentle, green city does him proud.

The sculptor has even given him back his missing eye.


Works by Lafcadio Hearn are available from bookdepository.co.uk.

The Dream of Lafcadio Hearn, a biography by Roger Pulvers (Kurodahan Press, $16.50), was published this year.