submitted by Kytherian Cultural Exchange on 25.03.2012

Zoe Savina at the unveiling of "Spirit of Mercury" sculpture 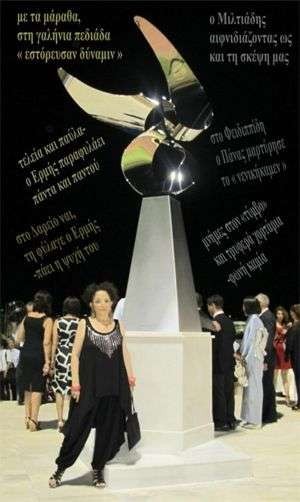 by Japanese sculptor Masaaki Noda donation, to the City of Marathon

Zoe Savina studied at The Professional School of Athens and Design and Decorative Arts in Italy. She writes poetry, haiku, tanka, minicuentos, essays, fairy tales, and critical presentations, which have been published in poetry journals, anthologies, newspapers, Who's Who, presented on the radio and television, in 19 countries. She has published 19 poetry collections and an international haiku anthology. Her haiku-tanka collection Enchantress was awarded The Poetry Prize by The Society of Greek Writers, and its third edition was translated into 6 languages. Savina is a member of The National Association of Greek Writers, founding member of The Coordinating Center of Hellenism, member of The World Haiku Association and an honorary member of The Yugoslav Haiku Association.