submitted by Kytherian Cultural Exchange on 25.03.2012 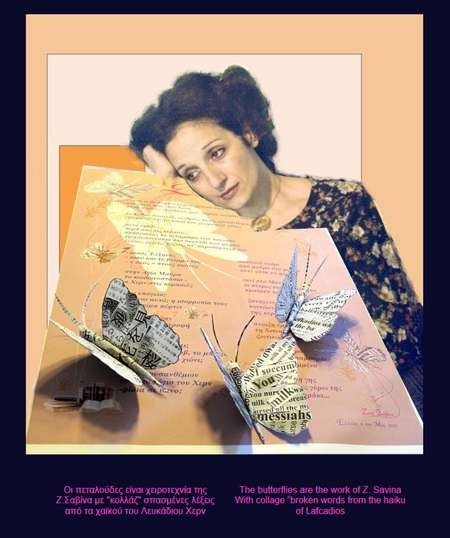 Featured at the exhibition:

“THE OPEN MIND OF LAFCADIO HEARN”

Events in his honor on the 120th anniversary of the arrival of Kozumi Yakuo in Japan International Art Exhibit dedicated to
Lafcadios Hearn At the museum:

October 10th – November 14th, 2010
(the works will also be shown in other Japanese cities)

Zoe Savina studied at The Professional School of Athens and Design and Decorative Arts in Italy. She writes poetry, haiku, tanka, minicuentos, essays, fairy tales, and critical presentations, which have been published in poetry journals, anthologies, newspapers, Who's Who, presented on the radio and television, in 19 countries. She has published 19 poetry collections and an international haiku anthology. Her haiku-tanka collection Enchantress was awarded The Poetry Prize by The Society of Greek Writers, and its third edition was translated into 6 languages. Savina is a member of The National Association of Greek Writers, founding member of The Coordinating Center of Hellenism, member of The World Haiku Association and an honorary member of The Yugoslav Haiku Association.