Photos > Diaspora Weddings and Proxenia > Proxenia, Weddings and Families - Introduction to Chpt 13, of Denis A Conomos's - The Greeks in Queensland.

Proxenia, Weddings and Families - Introduction to Chpt 13, of Denis A Conomos's - The Greeks in Queensland. 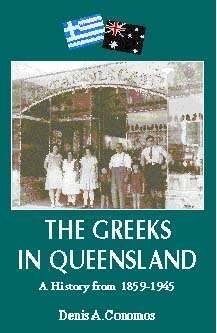 One of the best published accounts of Kytherian Proxenia occurs in Denis Conomos's publication.

"After 1920, there was a large escalation of Greek migration to Queensland. There were a number of reasons for this. The ten years of wars from 1912 to 1922 led many in Greece to seek a more peaceful abode in the antipodes. The economic distress caused by those wars provided a further incentive to migrate. The chain migration, commenced in the early years of the century, now gathered momentum.

Husbands who had intended to return to their families in Greece after accumulating assets, decided to stay and bring their families out. Many unmarried men decided to get married and travelled to Greece to marry and return with their new wife. In the process, there began a shift from a Greek community dominated by single males towards one dominated by the family.

By this time, there was a significant change of attitude on the part of the early migrants in the matter of returning to Greece. They were enjoying comparative economic prosperity and did not relish the thought of going back to live in a homeland beset with chronic poverty. They feared the prospect of further wars and the conscription that would accompany them. By now, they had settled down in the new land and were beginning to feel at home in it. Above all, they were coming to the conclusion that Australia, with its peace and prosperity, was a better country in which to raise a family than Greece.

Having decided to get married, many of the men went back to Greece to find a wife. Others chose a wife by correspondence and arranged for her to come to Australia. Some found a partner among the increasing number of single Greek women who were now beginning to arrive in Queensland.

Denis recounts the circumstances that led to his parents wedding:

"One of those who decided to go back to his home village to find a wife was the writer’s father, Arthur Conomos. He had come to Australia in 1912 at the age of 16, and had worked for the Freeleaguses in Brisbane, cut cane at Childers, and operated cafes in Boonah and Brisbane, before buying into a partnership which owned cafes in Toowoomba and Dalby.

In 1929, he left Dalby to return to Kythera to find a wife. When he arrived at his home village of Kapsali, he met Elenie(Helen) Emmanuel Varipatis, who had been only two years old when he had left to come to Australia. She was now a grown woman of 19 years. The families were koumbaroi, as Conomos’ sister Dindi was the godmother of two of Helen’s siblings and they were near neighbours. Conomos and Helen saw each other frequently in the normal course of village life.

After three or four months of such contact,
Conomos, accompanied by a proxeniti, asked Emmanuel Varipatis for permission to marry his daughter. That permission was granted, and Helen herself agreeing, the couple became engaged, marrying five months later.

During the engagement period, the couple saw each other constantly but always in the company of a brother or sister acting as chaperone. Eighteen days after they were married, they set off for Australia."

[Denis then proceeds to recount the history of a number of weddings and proxenia in Queenland in the period leading up to 1945.]

Various wedding photographs from The Greeks in Queensland have been reproduced in this Weddings and Proxenia section of the kythera-family web-site.

Thank you to Denis for permission to reprint.

Person's wishing to purchase the book - The Greeks in Queensland - are referred to the section Culture - subsection Bibliography - for details.