Voula Logus (nee, Coroneos) on her wedding day, with attendants. 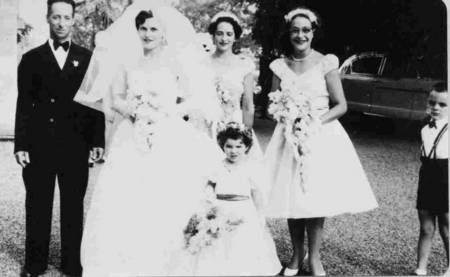 Gentleman in attendance is the late George Calligeros, of Dubbo, in NSW. And the young lady to the right is Elpitha Calligeros, later Codellis, now deceased, George's sister.

George and Elpitha were born near Fatsathika, a village known as Kourmoulianika and the family parachoukli is Kourmoulis. Their father was a well known priest Pappa Manoli Calligeros (Kourmoulis) and their brother was also a priest, Pappa Hristos in that area.

George had previously married Voula's sister, Eleni - the story of which has been recounted in an entry in Cafes, Shops & Cinema's.

The flower-girl is George and Eleni's daughter, Angela.

And the distant page boy on the right is George (Tzortzo) Poulos, son of Con and Angie Poulos, Gilgandra, NSW. Angie is the older sister of Eleni and Voula.

[Gilgandra lies 40 miles north of Dubbo, in the Central West of NSW]

There are numerous other entries about Gilgandra - and the many Kytherians who lived and worked there; 1910-2000, on the kythera-family.net website.