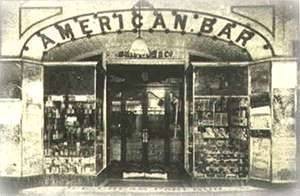 "In about 1912, the Kytherian, George Sklavos, opened the American Milk Bar at 276-278 Brunswick Street, Fortitude Valley, having apparently spent some time in America and observed the latest milk bar developments there.

His shop was one of the most modern of its type at the time, and it became a model which many of its owner's compatriots were to copy. A modern version of the old 'refreshment rooms', it sold the usual pies, sandwiches, cakes, hot beverages and confectionery, but with the help of the new milk-bat technolgy, it was able to offer more. Malted milks, freshly made fruit drinks, ice-cream sodas and sundaes became important new items on the menu.

Customers either stood at the counter to be served, or sat at the tables, which seated more than one hundred people.

There was a staff of about fifteen, both males and females.

Panagiotis Dimitris Feros (Peter Feros), who worked there in 1915, has descibed the shop as having 'every facility known to the game then.'"

Copies of Denis's books are available from the Kytherian Association of Australia, and, from George Poulos, who, amongst other things, is a current Committee Member of the Association. (2004).


To view a larger collection of photo's, including many Kytherian-Australian photo's go to


Thanks to Maria Hill, for allowing us to reproduce Kytherian photographs at kythera-island.....

George Sklavos spent some time in the Richmond district around 1907/08, at the same time John Zerbothakis (aka Zervoothakis, J. Z. Thakis, and other combinations) had ‘The American Café’ in Molesworth St., Lismore. I’ve always wondered whether Sklavos built on Thakis’ idea for the name and style of his Brisbane café? Thakis opened his café in late 1906 as a classic oyster saloon, but it quickly evolved into a soda fountain joint offering a wide range of aerated fruit drinks. The only clue on his identity comes from his adverts where he claims experience in Melbourne and New Zealand cafes. Coincidentally, George Alidenes, an Ithacan who also spent many years in Melbourne and New Zealand, appears to have been an associate. Alidenes turned up in town from Brisbane in 1904 with the entrepreneurial Ithacan, Athena Andrulakis (Lakis), who also spent a fair period in Melbourne. Thakis disappeared from Lismore around the same time as Sklavos and Alidenes and his whereabouts are a mystery until he pops up as a café owner at Balmain post WW1. I’d be grateful to hear from anybody who has knowledge of him.