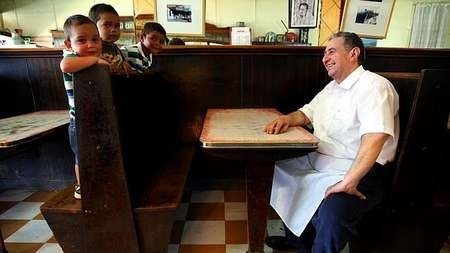 What a double whammy of bad news it was for the good folk of Brewarrina in the August 28 edition of The Land.

The cover story, featuring a picture of local grazier Ed Fessey with the Premier, Mike Baird, concerned the ongoing drought gripping the North West, and the inadequacy of government assistance under the new, and somewhat laughable "drought preparedness" funding arrangements.

But then on page five we read of the more poignant disaster visited upon Brewarrina: the fire that engulfed and consumed the town's truly iconic main street landmark, the Café de Luxe of Angelo and Margie Pippos.

Since then, readers from all over have come out of the woodwork via letters and Facebook posts to pay tribute to the Pippos family and to recall times spent in this worthy establishment.

To which I add my own: as readers of my book would be aware, I spent the drought year of 1965 in Brewarrina, and many a scorching, dusty day was only made bearable by the balm of a cooling lemon squash from Angelo's soda fountain.

If a commercial traveller were visiting, we might use the excuse to join him (never "her", in those days) for lunch at the café, where a generous meal of steak or a mixed grill would usually obviate the need for an evening meal.

Country families in town for the day would likewise descend on the café for lunch (or "dinner", as country folk tend to describe the midday meal, regardless of its composition), where they could be sure of bumping into friends from in or out of town.

It was a similar story in country towns across eastern Australia: the "Greek café" by the 1960s was firmly established as the gastronomic centre and daytime meeting-place of rural communities.

It was Angelo's father, George Pippos, who opened the Café de Luxe in 1926.

He was one of the generation of Greek immigrants in the early 20th century who between them revolutionised Australian "eating out" habits.

In an interview broadcast on ABC's Radio National only weeks before the fire, Angelo Pippos reflected on a working life spent catering to the gastronomic needs of an outback, mixed-race country town.

He said the meals they served were more American-style than European, mostly steak and eggs and mixed grills - "I tried introducing Greek food a couple of times but people didn't like it."

How tastes have changed!

From Brewarrina, with its one (albeit highly distinguished) Greek café, I moved in 1966 to Crookwell, which at that time boasted no fewer than four such establishments, all of them doing a brisk trade.

Only one remains today under its original Greek family ownership.

At the north-western end of the shire, about 50 kilometres from Crookwell, the tiny village of Bigga depended on its single Greek café-cum-general store, owned - as it still is today - by the Faros family.

The nearby regional centre of Goulburn, then being a highway city, likewise had numerous Greek cafés in the 1960s, although none of the others held a candle to the cavernous Paragon, which thrives to this day, still in Greek family hands (though different ones to its 1940s founder).

The unfortunate term "fast food" had not then been coined, and dining was a more leisurely and civilised business than grabbing a bag of take-away fodder from the likes of a McDonalds or KFC to gobble on the run.

We owe a huge debt of gratitude to George Pippos and his countrymen, and their descendants, for bringing a welcome draught of Mediterranean culture, hospitality and gentility to rough and tough rural Australia.

It was reported following the Café de Luxe fire that Angelo and Margie Pippos were considering rebuilding on the same site.

Generations of customers past and present can only hope they do - for Bre's sake.