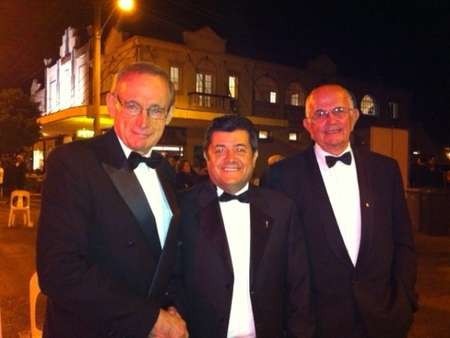 When it comes to regional development – especially if it’s the smallest of country towns – sometimes the simplest approach works best. Bingara pop. 1,300 (on its best day – as a local quipped) is set in the foothills of New England, the gateway to the North West and the Queensland border, 600km North of Sydney. What’s it got going for it?

Its competitive advantage may be its Roxy Cinema, built in 1936 by three Greek partners, migrants from the island of Kythera. It is a striking Art Deco work, extravagant in fact, and belongs in any history of Australian cinema architecture or the Australian Art Deco style. To complete the extravagance these three Greek partners added a roomy café and a guest house, plus a first floor residence.

The advice I received was this would become a focus for community activity and bring some life into a one-street centre. It would also pay tribute to the history of Greeks in rural Australia. Beginning in the early 20th century they had introduced cafes, one for every town and hamlet. And 90 percent of the bush cinemas were established by Greeks.

Well, the Kytherians were there in strength on Saturday night for the celebration of the official opening of the restored cafe and the museum. The hosts were John Wearne, a retired farmer and veteran leader of local government in rural NSW, and his wife Wendy. John had pushed along the Roxy restoration and has built support for it and pursued the links with the state-wide Kytherian community.

There was Greek feasting and dancing and the ritual smashing of plates, the screening of a Fred Astaire and Ginger Rogers movie, a talk by actor John Wood about the history of the Roxy. This is worthy of movie treatment itself. Consider that those daring Greek businessmen who invested in a cinema and a café with such extravagance were then driven out of business by a local competitor with his own screenings at a veteran’s club (incredible – two cinemas in this tiny country town) who cornered the better movies and advertised that his picture show was “100 percent Australian owned.” The Greeks were driven into receivership.

By the way, Bingara dispels the notion of infrastructure deprivation in the bush. Remember – a population of 1000. The hospital has recently had $12 and a new water treatment plant was built with $5 million. There is a new Commonwealth-funded age care hostel. The road to Narrabri has been recently sealed. I spoke to the school principal. The central school – kindergarten to year 12 – had new buildings as a result of the BER. The infrastructure is in fact terrific.

On Saturday I met locals, visiting Greeks from Sydney, former speaker Richard Torbay just triumphantly re-elected as independent member for Armidale. There was one farmer who had helped blockade me in Walgett airport in 1998 in a demonstration against my government’s policies protecting native vegetation. All history now. And I’m happy that the rain and high commodity prcies are looking after him.

I couldn’t visit that 1930s cinema without thinking of the youngsters who had been there watching Fred Astaire and Ginger Rogers when it opened in 1936, only to be swept up a few years later by World War II, recruited for Tobruk or Singapore. Happy days at the flickering screen in Bingara would have seemed far distant life, a different planet.

This brings great memories of my growing up in the bush and spending some of my working life in country towns. These cinemas were usually family run affairs. They were the social centres as you say. I will never forget the commotion late comers caused at the theatre in Manilla, NSW, when people interrupted the movie with greetings in a loud voice , much to the annoyance of uninvolved patrons who wished to see the movie. On one occasion the projectionist went to sleep and so didn’t change the reel and the patrons sat in noisy, complaining darkness until they gave up and went home. In Goulburn as a kid I had the choice of two picture theatres, Hoyts and the Odeon. Matinees on Saturday afternoons would be interrupted by the sound of Jaffas being rolled down the sloping floor from front to back. I recall one evening performance of a Steel Rudd movie and an excited patron , there with his wife and kids from a small village outside Goulburn, constantly anticipated what the next scene would be in a loud excited voice to the amusement of the whole theatre.I recall the open air theatres in hot areas as far apart as Moree, NSW and Broome, Western Australia. The stories my father told me of visits to the theatre in Crookwell, NSW. On one occasion one of the locals had been an extra in the filming of Forty Thousand Horseman on the sand hills at Wanda Beach/Kurnell. He reserved the front row for his entire extended family and amused the audience by announcing his approach across the screen on horseback in a trumpeting voice—” Here I come Mum…There I go Mum “.In the village of Cooyal the local dance hall sometimes hosted travelling picture shows. I recall seeing Jekkyl and Hyde and having to ride my bike home alone in the middle of the night and being terrified by the call of a mopoke. Finally I recall going to a Sydney theatre to see The Picture Show Man with a dear friend of mine in 1977, whose father ran the picture theatre in Kilkivan in Queensland. At the end of the performance there was spontaneous applause from the audience. something I hadn’t witnessed before or since.