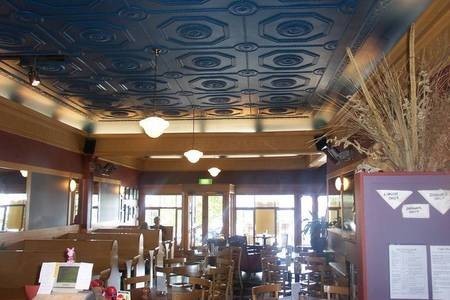 Cafe Niagara, ground floor, looking back to Main Street, from the Bar. Note the impeccable restoration work of the Art Deco interior. All parts of the Cafe Niagara have been maintained to this very high standard.

The text that follows is a school assignment undertaken by Maya Rio-Pigeonneau, a (then) 15 year old French-Australian girl, of Katoomba, NSW, Australia.

Her mother, a delighful Frenchwoman, with a very strong accent, currently (2004)-manages the Cafe Niagara.

The current owners are Neil Aveydissian, and Phillip Marler.

I would like to thank them all for giving permission to publish the text, and to take photographs of Cafe Niagara.

The original assignment included an extensive photographic record which has not been utilised in the "posting" of this entry.

Adolescent errors of prosaic style and syntax have not been edited out.

Cafe Niagara, that place we've all walked past and looked at, with it's delicious gourmet burgers and great 1930's style, it has become one of the most loved restaurants in Katoomba; but how did it all start you may ask?

The first storey a small shop, serving up delicious sundaes, candies and sodas. The second storey was a larger kitchen connecting to a big ballroom and three bedrooms, the premises also has a garden, which backs on to the Carrington. [A very large and famous Hotel, in Australia. Cafe Niagara faces North, and the Carrington faces East.]

In 1929, the Niagara was to undergo some drastic changes, such as moving out the building, to the back of the garden to give more space for a toilet block, installed for customers, an extra kitchen downstairs to bake cakes in, an office upstairs and upgrading the ballroom to a more modern style.

All these changes meant that the already crammed in family of four had to downsize to only two bedrooms.

If you look at the hardships of running the Niagara, not much has changed. The waitresses still have to run up and down those very steep stairs, but they are quite lucky, when you hear what Jame's waiters and waitresses had to endure. James employed what he called a 'dumb waiter', whose objective was to run up and down the stairs all day and sometimes night, to get the food.

Now the Niagara has upgraded to computers to communicate orders with the chefs upstairs, but back then, they had a speaking tube, so while you were eating you would hear these bellows of chefs not comprehending the waiter/waitresses order.

Peter, James's son, once remarked about the great depression, 'We were quite fortunate during the depression years, as we had plenty to eat, and because of the coal fire stove, we had plenty of heat in winter!'

The Niagara hit a peak in the 1940's 'boom time', with business flowing quite smoothly.

They were opened from early morning to late night, seven days a week.

But this all changed in 1942, when the family awoke to the smell of smoke. The chimney boiler, which supplied hot water, had become red hot during the night, and set fire to the floor between the storeys. The fire brigade put out the fire, but they left a lot of water damage, which meant that James had to replace some of the ceiling and floor, this also meant that cafe Niagara was out of business for some time.

Soon after they re-opened, their son, George, died of Meningitis.

Both parents were devastated and decided it was time for them to take some time out. They leased out the building for some time, until they sold it to new owners, Neil and Phillip.

The upbeat new owners bought a new energy to the restaurant, and a new sense of moderness. Soon after starting at the Niagara, the new owners employed a show involving a drag queen. This was a hit, and after 3 years of ownership, the fabulous Miss Pastie De Klyne, is still going strong. They've even had impersonators of Elvis Presley, MArilyn Monroe, Elizabeth Taylor, and Rod Stuart.

All these factors plus much more make cafe Niagara one of the most enjoyable cafe's in Katoomba.

I chose this site because I believe Niagara has one of the most amazing histories and a story that needed to be told.

Some may say that I only chose this site because my mum is the Manager, but this is not true at all.

When I walk into the Niagara I feel like I have time warped back to the 1930's and I can actually picture a couple sitting in the booth with a beautiful colourful sundae sitting in front of them.

I believe the Niagara should be preserved for future generations so they can acknowledge its background, and the way people used to live in the 20's and 30's.

Not many people today know the story of the Niagra. I just hope my assignment opens your eyes to how important the Niagara is, and next time you walk past, you don't just look at it as just another cafe, but you acknowledge the hardship of how it got there.

Old Leura, and Katoomba. The Rotary Club of Katoomba. [Publishers.]

Old Leura, and Katoomba. The Rotary Club of Katoomba. [Publishers.]