Crockery, teapot and menu from the Busy Bee Cafe on display at Gunnedah Watertower Museum 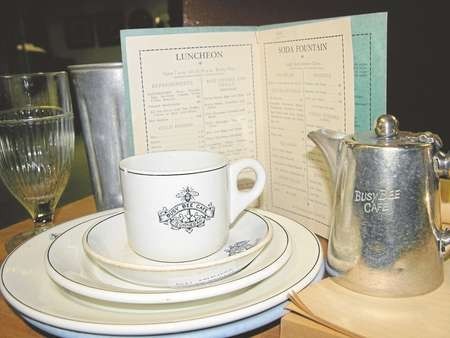 Photograph: The Busy Bee Cafe as most people remember it in 2003.


Local residents who have fond memories of the Greek cafes scattered along Conadilly Street were saddened when the Busy Bee closed its doors for the last time six years ago, ending a colourful chapter of the town’s history.

There was a sense of loss and nostalgia when owner Loula Zantiotis folded up her apron for the last time and handed the cafe over to tenants in October 2007.

Now the warm and inviting interior of the unique building will come to life again when the original furnishings and fixtures feature in a new five-year exhibition at the National Museum of Australia, in Canberra.
The exhibit will be part of a Greek cafe collection, with original furnishings and fixtures, based on photographer Effy Alexakis and historian Leonard Janiszewski’s project in 2007-2008 to identify remaining Greek cafes and cafe memorabilia of national significance around the country.

The museum has invested in a permanent collection of the historic memorabilia which is sure to delight Australians who grew up with the hardworking and congenial Greeks who came to the Great South Land looking for a better life for their children.

Growing up in Gunnedah in the post-war era was a time when Greek cafes thrived and the taste of thick milkshakes, orange freezes and toasted sandwiches was a way of life.

Although early history is sketchy, it is believed the Busy Bee Cafe was built in 1914 as part of the Doolan buildings, with the tea-rooms accessible via an archway through the shop next door, leading to the Grand Central Hotel.

Lambros Zantiotis bought the Busy Bee in the early 1930s and was joined by his son Peter on March 15, 1936, from the Greek island of Kythera in the Ionian Sea. He had come out to Australia on his own as a 12-year-old, with his mother Anastasia and sisters joining the family after the war.

As Gunnedah emerged from the Great Depression, Lambros Zantiotis hired cafe interior designer, Stephen Varvaressos, to install the cafe’s glamorous art-deco fittings, which remained virtually unchanged.
Now, the cafe will live on in the exhibition, entitled Lambros Zantiotis’ Men, with the genuine interior furnishings, signage and cafe ware surviving from the Greek cafe’s heyday in the 1950s and 1960s.

Overseeing the display is Joanne Bach, the National Museum curator, who is excited to have seen the project through to its realisation.
Speaking to Greek newspaper Neos Kosmos, Ms Bach said the exhibit will feature objects acquired from the Busy Bee Cafe in Gunnedah.
“It will be displayed in our Journeys: Australia’s Connections with the World gallery,” she said.

“Personally, it’s been very satisfying to develop the exhibit, having done the work on acquiring the collection – it’s not often that we curators get to see a collection through in that way.”

She said the Busy Bee at Gunnedah was one of a limited number of classic Greek cafes that survived almost intact, and is a fine example of early, angular Art Deco design.

“It appears to have been the first cafe outfitted by the renowned Greek shop-fitter, Stephen C. Varvaressos,” she said.

“Members of the Zantiotis family operated the Busy Bee from the mid-1900s through to 2007 when Loula (Theodora) Zantiotis (nee Cassimatis) finally retired and the business was briefly sold to the Faint family.”
In 2002, when Alexakis and Janiszewski interviewed Loula Zantiotis, she believed the Busy Bee’s days were numbered.

“About 30 to 40 Greeks were here in 1955,” she told the researchers.
“Most of them had cafes – the White Rose, one block down from the Busy Bee, the Monterey, across from the White Rose, the Acropolis, further down the block,” she said.

Loula lamented at the time that only a few Greek families still lived in Gunnedah, with her own children moving away to follow their dreams.
She said that although she was lonely at times, she was not staying in Gunnedah for business – the cafe was her home.

Loula stayed in Gunnedah for a while before moving to Sydney to be closer to her family – she is still, however, a regular visitor to the town she came to as a young bride in 1955.