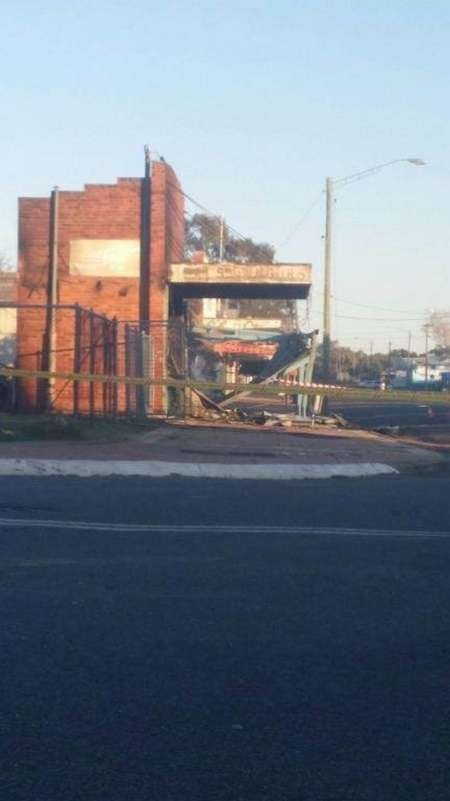 It's been the heart of the community for a long time, and it's such a shock to see it go

Brewarrina locals are mourning the loss of their iconic Cafe De Luxe which was destroyed by fire on Sunday night.

Unchanged since it first opened its doors in 1926, the Cafe was a gem to both locals and tourists, who enjoyed sodas, thick shakes and conversation in its wooden booths.

A blaze tore through the 88-year-old cafe on Brewarrina's main street around 8pm, destroying the original building which included the residence of the cafe's owners, Angelo and Margie Pippos, along with the adjoining vacant building, which once housed the town's pharmacy.

The exact cause of the fire is under investigation.

Specialising in house made lemon, orange and pineapple squashes, it was one of the earliest soda parlours in Australia that had been Greek-run since its establishment.

Brewarrina Shire Council general manager Dan Simmons said the loss of the business is a huge blow to the people of Brewarrina.

"It's been the heart of the community for a long time, and it's such a shock to see it go," Mr Simmons said.

"Everyone came down to see it happen when they heard about it; there would have been a couple of hundred of them all outside in their pyjamas watching it burn; it just got away so quickly nothing could be done.

"Angelo had lived his whole life out the back of that cafe, and it really is one of those stories of immigrants coming out and making a great contribution to the community.

"We do have two other spots to go and eat during the day but it's going to be pretty hard to replace."

The community was preparing to help the Pipposes to resettle in temporary accommodation, he said.

Such sad news - a loss to the Pippos family, the Brewarrina community and the Australian people. So few Greek cafes remain as a testament to the enormous role Greek proprietors played in the social fabric of this country. Queensland lost the Laconia Cafe in Chinchilla to the floods in 2011; now we have lost the wonderful Cafe de Luxe in Brewarrina. I cannot imagine what this must mean to someone who has spent the greater part of his life behind that counter. If it helps, Angelo; I share your loss . Toni

So sad to see such a beautiful place destroyed. I have wonderful memories of going there regularly as a child 40 years ago, as did my parents when they were children at Bre. My Dad Kevin Grant turned 80 in February. It was such a centre of the community as will be sorely missed. Angelo and Margie, I'm sorry for your loss.

Will always remember going there after Sunday School to get a treat before going home. And visiting the café every time I made it back to Bre to visit family. Playing the juke box. Back then it was 45s. And sitting in the cubicles.