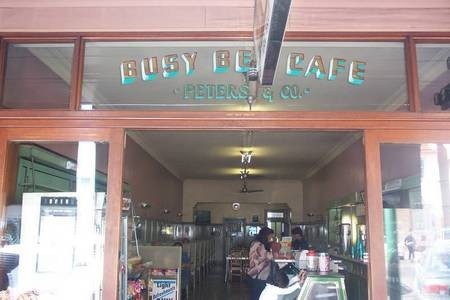 published the following article about Loula Zantiotis and the Busy Bee Cafe.

Stopping at the Greek cafe on the way home was once a ritual in country life. The lights were always on, the faces always welcoming, and the meals hot. As a traveller or country dweller, it represented a singular, comforting port of call before another long, hungry and thirsty drive. For those on farms or passing through outside buisness hours, the cafe was the only place that could be relied on as a suitable changeover point for everything from pups to pullovers.

The past three decades have wreaked closure on many of the cafes run by Greek families in regional Australia. Victims of social change, retail laws, lifestyle choices and their own success, these beacons of hospitality in the bush are practically extinct.

The Busy Bee, pictured, in the north western NSW town of Gunnedah, is one survivor of the glorious cafe era, its decor and owner intact.

It is a gem of a place, where little has changed since its glamorous fittings were installed in 1936 by cafe interior designer Stephen Varvaressos, at the behest of the proprietor, Lambros Zantiotis.

A temple of art deco design with illuminated Greek columns at the back counter to display the soda ware and cigarettes, it remains a monument to its time. Old electric fans whir in the summer heat, and the steel lids of the refrigerated cabinets clunk like they always did when they are opened for ice-cream or fruit drinks.

Etched in the glass at the top of the shop is the cafe name, underneath which is written Peters and Co, a common enough sight according to social reseracher Leonard Janiszewski of Macquarie University.
"They may have possibly being hoping to highlight an association with Peters' American Delicacy Company Ltd., later to become popular ice-cream manufacturer, Peters", he said.

Janiszewski has been gathering material on Greek cafes in regional NSW for almost a decade as part of a study of the Americanisation of Australian eating and social habits. These cafes were responsible for our introduction to much American confectionery, sodas, ice-cream, milkshakes and crushes.

Some cafes began as oyster bars, but were soon to switch to the craze of American-style snacks and food.

White Rose and Blue Rose were popular brands of chocolate, while the Golden Gate, the Niagara, the Hollywood and the Monterey, familiar names to cafe habitues, are all about the American connection.

Some Greek families liked to cling to their Hellenic roots by choosing names such as Olympia, the Acropolis and the Parthenon.

In Gunnedah's Busy Bee, there has been scant sacrifice to the last half century, save a glass doors drink fridge in the place of a confectionery counter, and the cigarettes being moved beyond the reach of shoplifters.

At 71, "Loula" Zantiotis still runs the shop although for how much longer, she is unsure. Since her husband Peter died seven years ago, she has continued to open the folding wooden doors at the front of the shop but for shorter hours, and with a reduced menu. Her three children have departed for the city with no intention of returning to the business.

Loula arrived from Kythera, the same Greek island from which her husband came, and married in Sydney in 1954, before being whisked some 400km away.

Freindhips were formed with other Greek families who owned the other four cafes in town and trips made regularly to Tamworth to attend the Greek Orthodox church.

But life outside the shop was largely non-existent. The cafe, in its heyday, employed six people including a cook, kitchenmaids and waiters, and opened seven days a week from 7am to 11.30pm.

Manny Zantiotis, the youngest of the family, remembers being the envy of his school friends when he went "home" to the cafe and its attractions of having anything you wanted to eat and drink. He said his father always told him "you don't want to do this" as he worked ceaselessly in the shop.

Like many hard working migrants, he wanted only for his children to get a good education and better opportunities. Manny's jobs would include re-stocking the shelves, rising early to light the stove, turning on the coffee machines and toaster, and cleaning down benches in the kitchen.

The swinging kitchen door always held some fear for young Emmanuel, as above iot his father kept a leather strap, a constant reminder of tasks to be completed.

"I remember a lot of people saying, don't ever change. My father never installed a deep fryer and stove for takeaways out the front. There was never that smell. It was always nice and clean, not greasy. It is to his credit that he stuck to his guns."

The 36-year old computer technician said the thought of selling the cafe leaves him with mixed feelings.

Mrs Zantiotis has an air of resignation when it comes to talk of the future. No buyers have come forward for the business she has helped to foster and grow for almost a century. If the cafe is not sold as a going concern, she intends to sell the historic fittings and keep the building.

Meanwhile, it's business as usual in her office, with its newspaper and magazine stacks, and the wall mounted telephone with the double bells.

submitted by
Effy Alexakis And Leonard Janiszewski
on 27.02.2005

Loula (Theodora) Zantiotis (nee Cassimatis) still runs the cafe with the assistance of female waiting staff. However as a widow whose children have left home and entered other occupations, Loula perceives the cafe’s days are numbered, unless it is acquired by a young family interested in preserving its food catering tradition. One of the limited number of classic Greek cafes which have survived almost intact, the Busy Bee’s exterior and interior (furnishings and food catering equipment) are fine examples of the early Art Deco style.