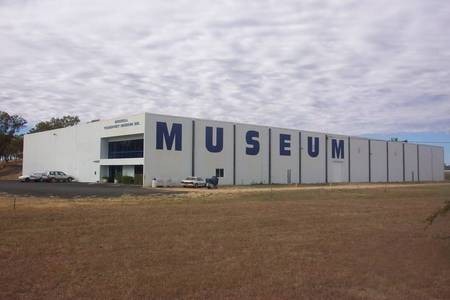 The massive Inverell Motor Museum, which housed the Museum and Galleries Foundation of NSW {see separate entry for details of the Foundation} -"Milkshakes, Sundaes and Cafe Culture" display in 2004. [See other entries in this category - "Cafes and Shops" - by Inverell businessman, and honorary Kytherian Peter Makarthis.]

A PDF format educational kit, about this display is avalaible to download at

This is a very important and useful educational kit - and particularly relevant to all Kytherians.

The Museum is located on a large acreage on the outskirts of the town.

Originally built to house a snack food factory - the venture collapsed, prompting the Local Council to buy the building, and dedicate it as a Museum. This has proved a bonus to the cultural and civic "life" of Inverell.

Situated in North-Western New South Wales, the population of Inverell is c. 10,000, but it draws on a shopping/commercial population of about 30,000 people from neighbouring towns.

223:The story of my grandparents, my mothers parents (mother, Helen Fardouly) has been recounted by Inverell local historian, Elizabeth Wiedemann, in the book Holding Its Own. Published by the Inverell Shire Council. THE IMMIGRANTS: Harry And Artemis Fardouly From Kythera to Tingha to Inverell Modern customers eating their ice-cream sundaes on little glass dishes in Byron Street’s Regent Cafe are reliving the experiences of their grandparents in a cafe which has changed little in 60 years. Behind the counter are Con and Dorothy Fardouly whose father Harry redecorated his shop, installing decorative lighting and up-to-date furnishings in 1935. Harry Fardouly had a flair for business, and during the 1920s he correctly worked out that Byron Street was going to take over from Otho Street in importance. He therefore left the other Greek cafe owners in Otho Street and branched out on his own. Hany’s father, Constantine Fardoulis, came to Australia in 1901. The island of Kythera in Greece, where he was born, was far too small and barren for all the young people reared there, so generations of them migrated. Constantine had a wife and four children, but he had to leave them behind, sending money for their support, until he could afford their fares. After spending periods in Gunnedah, Manilla and Bingara, Constantine discovered Tingha, which was in its boom years. Here was adequate scope for someone prepared to work hard m a refreshment business, which was what he established in Ruby Street in 1907 (in the same location as the present cafe). By 1908 he brought one son to Australia, with the rest following in 1912 and his wife and daughters soon afterwards. The separation had been a long one. As it turned out, Constantine did not spend the rest of his life in Australia. Leaving his children here, he and his wife went back to Greece in 1914. Returning to his first love of life at sea, he began a business ferrying vegetables from the islands to Athens. However when the ship was wrecked he returned to Australia from 1919 to 1921 in that year he sold his shop in Tingha and returned to Greece where he remained until his death Meanwhile Constantine's youngest son, Harry (Haralmbos), who was always known as Fardouly, came to Inverell where the established firm of S. Peters and Co., had a thriving business in Otho Street. Members of the Peters family had been living in Inverell since at least 1914, and were selling confectionery (made on the premises), fruit and wine, and restaurant meals as well. Thco and Peter Psaros (who came from Kythera in 1912) were also associated with this business, with several other Greek men, who were given work in the restaurant while they learnt the language and established themselves in Australia. Soon the new refreshment, icecream, was being made in the big churn behind the shop. Some time during the 1920s, Harry decided to open his own Alhambra cafe in Byron Street, in part of the building occupied by Burge Bros’ big store. As well he bought a building further down the street which housed Fowler and Burgess' auction mart for many yeaxs. He was also able to buy half of Phoenix Chambers in Otho Street and the shop next to the Australian Hotel. Harry was doing well enough to be married, and he soon found a bride from the Lismore Greek community, Artemis Crithary, who had not long emigrated from the island of Kythera. Harry and Artemis were married in a Greek Orthodox ceremony in 1929 and set up home in Otho Street next to the old school ground. This provided an extended yard for their family as they arrived one by one - four girls and a boy, who was named, according to custom, after his grandfather. Harry’s responsibilities were substantial in Australia, but he also helped to support Australian relatives and sent money back to Greece on a regular basis. One relation he introduced to Inverell was brother-in-law Jack Fatseas. Jack operated the shop opposite Inverell High School for many years. By 1942 the Inverell Greek community numbered 35-40, and they strove to keep alive their religion and customs. They were chiefly involved in the hospitality industry, running five cafes between them - the Australia, Monterey, (both opened in 1936), Regent, Empire, and Black and Green. Chrrstenings were particular causes for celebration. with several children being consecreated at once by a Greek Orthodox priest brought to Inverell especially for the occassion. Like many of the women, Mrs Fardouly could only speak Greek at this time, so her children learnt Greek at home and English at school. They were always aware that they were different, and would be made fun of if they spoke their own language. Even though they were born in Australia, Con and Dorothy still feel themselves to be Greek - “I think in Greek”, says Con. “People are more accepting of Greeks now”, remarks Dorothy. Harry Fardouly was never able to return to Greece - even for a visit. One planned trip was interrupted by the war, and afterwards he became very sick and died in 1956 after years of illness. The cafe was kept running by his wife and their children after school. Yet Harry and Arternis were determined that the children should receive a good education, and all completed the Leaving Certificate Artemis held the family and business together very efficiently. She lived on in Inverell until her death in 1989.