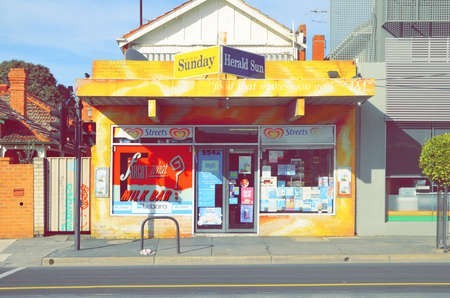 Photograph: One of the last of a dying institution. Illustration. Eamon Donnelly.

It all started for Eamon Donnelly when he revisited the fondly remembered milk bar of his childhood, in Geelong.

Ten years ago, Melbourne illustrator Eamon Donnelly decided to revisit his childhood home in suburban Geelong and take one last peek through the back fence.

Once in Geelong, remembering life in the 1980s, he decided to see if his old corner store was still in business. “Going to the milk bar was my first taste of independence as a kid. I’d go with a pocket full of copper coins and come back with ice creams and milkshakes,” he says.

“I just remember this amazing Aladdin’s cave of food and smell and colour.”

But Donnelly’s neighbourhood milk bar — Hawking’s Corner Store, run by David and Peggy Hawking and their family — was gone, replaced by a boutique real estate agency.

“There were a few old tin newspaper signs on the side of the building, but they'd jackhammered away 50 years of hand-painted advertising.

“As an artist, it appealed to me and I took a photo of it. Then I started to wonder what the other milk bars in Geelong had become.”

Over a decade Donnelly collated hundreds of photographs of suburban corner stores and milk bars into a book. The response to that led to a commission for him to create the banners that have begun to be hung around Sydney as part of the Art +About festival.

And while some closed corner stores have met their end at the hands of developers and buyers who wanted to build something new, hundreds of others lay derelict or are still in business. Others have become family homes, prized for their uniqueness. But they aren’t easy to find.

After a fruitless search for corner stores on the market, it turned out that The Australian’s national arts correspondent, Michaela Boland, was looking to sell her converted inner-Melbourne property. Last sold in 2010 for $836,000, the former Victorian corner store at 1 Waltham Street, Flemington, has three bedrooms and a large yard and has been renovated. The sale is being handled by Lou Rendina, of Rendina Real Estate, who says corner stores can become showcase homes because of their quirkiness, including old veranda posts. The 204sq m property is expected to fetch more than $900,000.

Rendina recently sold a much larger corner store in nearby Kensington, at 168 Bellair Street, which was the first property in the suburb to fetch $1 million when Rendina sold it a decade ago. The 1891 building set a new suburb record recently, selling for more than $2m.

A 310sq m site of historical significance, the building was originally the Kensington Property Exchange, with an adjoining residence known as Islington, both designed for local realtor James Wales. The real estate chamber has the original joinery, fixtures and ornamentation, and, as Rendina excitedly says, “it has a turret”.

Rendina, who works mainly in Kensington and neighbouring Flemington, says the suburb has undergone a shift, with young professionals moving in.

He says 200sq m is a good-size parcel in the area, and the real drawcard is the booming Wellington Street precinct in Flemington.

“The quality of restaurants has gotten better, there is a real village community, and a lot of professionals have been drawn to the area because the Melbourne CBD is only five kilometres away, and two large hospitals are nearby, so that brings in a lot of doctors and nurses,” he says.

In Armidale, Luke Fahy and Peter Georkas are selling the lease on 80 Rusden Street, an operating corner store and residence with a walk-in, walk-out price of $35,000.

Fahy says the property is nearly 70 years old, and has always operated as a small business, although he points out there have been renovations, most recently eight years ago when stainless steel splashbacks and a new deep fryer were added.

“It’s about two blocks from Armidale’s CBD, so there are a number of surrounding businesses like accountants, banks, a gym and car yards,” he says.

“This shop is unique because it borders a business area and a residential area. The demographics are mixed in the residential side from young families to a well-established older community.

“It’s a local institution. The business has been around for a long time and everybody knows of it, and it’s a rewarding job with the perks of being your own boss,” he says.

The shop and three-bedroom house rents for $431 a week.

In Geelong, Donnelly says he was eventually contacted by the daughter of Dave, the proprietor of his local milk bar, when she saw the book he ­released.

“I've seen some incredible old milk bars. One had an incredible old Streets Cornetto sign, still there. Everyone loves Vegemite and Streets and Four’N Twenty, and corner stores sit in the same vernacular as those iconic brands.

“It’s one of those purely Australian things, a suburban thing,” he says. “Everyone has a fond memory of a milk bar.”