Photos > Cafes, Shops & Cinemas > Mission to bring light to what was once a dark place

Mission to bring light to what was once a dark place 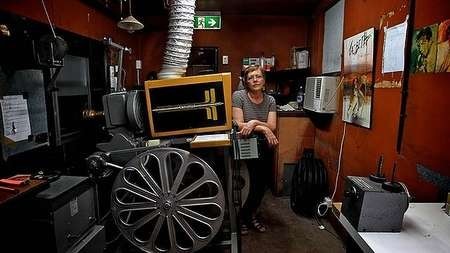 The restoration of the Roxy cinema at Bingara, has inspired other restoration projects, such as the Bowraville picture theatre.

Reeling back the years … Dr Lisa Milner at the Bowraville picture theatre, once a segregated cinema that has been restored by residents into a theatre space. Photo: Ben Rushton

''IF HE'S got Abo blood, he's got only one place - and that's with the other darkies.''

These were the words of Samuel Raymond, the owner of the racially segregated Bowraville picture theatre, reported in 1965 not long before his brick and timber cinema closed and began gathering dust for the next 35 years.

But the mid-north coast locals of today, dogged by the village's reputation for the gruesome murders of three Aboriginal children in the 1990s, are determined to breathe new life into their high street theatre with its galvanised iron roof.

''It was a beautiful cinema, but it was a segregated cinema,'' Lisa Milner, one of the locals who spearheaded the building's revival, said.

Advertisement
''Because Bowraville is an old mission town, a lot of people here were and are indigenous. And they used to have to come down the side, and they had to come to watch a film after it had started - so in the dark - crumping over people.

''They had to sit in the crappy wooden chairs and they had to leave after everyone else,'' Dr Milner said.

But the Freedom Rides - a busload of university students led by Aboriginal activist Charles Perkins - changed everything in 1965.

The students travelled rural NSW drawing attention to the towns and businesses that practised segregation.

At a National Museum of Australia forum a few years ago, Martin Ballangarry, a Gumbaynggirr man who is now a Nambucca Shire councillor, described his experiences as a 13-year-old Bowraville resident.

''So we went and bought our tickets and sat in the theatre; sat at the back and sat in the white fellas' seat - like, deadly, you know - with the cushion in it,'' he said.

''That was the highlight of my life at the time.

''For a brief moment, until the police came and ushered us out, politely, with the baton poking in the back.

But the racism that preceded that day remains fresh in the minds of many locals and some refuse still to set foot inside on principle, Dr Milner said.

After the Freedom Ride bus came through, it was a matter of weeks before the cinema - once the hub of Bowraville's social life that drew patrons from the banana plantations as far north as Grafton - closed its doors to everybody.

''[Up until] the 10 years before the turn of the century, this building was being used as a haberdasher's shop,'' Dr Milner, a cinema historian at Southern Cross University, said.

''That was just at the front. Down here in the auditorium it was their store room so there were rolls of fabric, boxes of buttons, dust, spiders, all sorts of things here. And it was a mess.''

Remarkably, while the building gathered dust, it remained structurally unchanged. ''It hadn't burned down, it hadn't changed,'' she said. ''People didn't have the money to change it either.''

A little over a decade ago, some of the townsfolk decided to reclaim the space and restored its interior to the point it can now host film nights, drama productions, school events, and touring plays and festivals. ''Sam Raymond's use of the theatre was as a privately owned and physically segregated business that just screened films,'' Dr Milner wrote in her recent brief history of the cinema. ''Now the building is a public space and a place where contemporary and dynamic social values are manifest.''