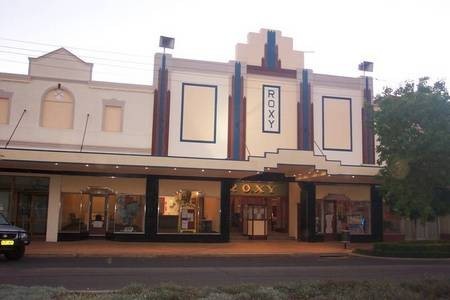 THIS IS THE Roxy THEATRE- MAIN PAGE

Additional links, can be found at the end of this article.

They traded under the name Peters and Co. Peters and Co signs are still displayed on the shop fronts of numerous former Kytherian cafes throughout NSW.

At great expense, this magnificent Art Deco Theatre, has been restored to its former pristine elegance.

This is a view of the Roxy's frontage.

To the right of the building, a Chinese takeway now operates.

Originally this takeaway was a Kytherian Cafe, called

In 2010, the Roxy Cafe, and will now operate a a Greek-Australian cafe.


Building the Theatre: from Chapter 5 [Part A] of KEVIN CORK's Ph.D Thesis, Parthenons Down Under.

Located in n Maitland Street, Bingara, near the corner of Cunningham Street, stands the 480-seat Art Deco -style Roxy. It was not built without difficulties and it was never the success its originators hoped. George Psaltis, Emanuel Aroney and Peter Feros
...purchased a block of buildings in Maitland Street, Bingara, consisting of premises occupied by them as Refreshment rooms, and three other shops adjoining.

Mr Psaltis informed me that he intends to erect a modern and up to date Picture Theatre...

The development was announced in June 1934 in the local Bingara newspaper. Plans for the shops and theatre received favourable comment. "When completed it will have an equal frontage to both streets, a symmetrical and well-balanced building, a splendid addition to the town's business houses." The architect for the cinema was W V E Woodforde of Sydney and construction of the cinema commenced in early 1935. It was subject to a number of alterations (believed to have been instigated by Psaltis) that resulted in extra time and expense. One of the alterations was to heighten the auditorium walls by 4 feet 6 inches to allow for the possible later inclusion of a dress circle. This brought about changes in decorative treatments of the main ceiling and proscenium.

It was not until the following year that the theatre opened.
Probably no event in the history of Bingara has caused more interest and excitement than the opening of the new Roxy Theatre, which took place on Saturday night last. The crowds which stormed the streets in the vicinity of the theatre...and long before the opening time, it was impossible to wend one's way through the crowd in front of the main entrance.

While its exterior is a basic rectangular interpretation of the Art Deco style, with pilasters and entablature and simple panelling to break up its cement-rendered wall surface, the interior is something different. Entry to the auditorium is through a long, narrow vestibule, the ticket box being situated in the middle at street entry (typical of USA cinemas). A short flight of steps leads up to the auditorium entry doors. The rear section of the auditorium is stepped and seating is fixed, whereas the front section is flat (for dances) and seating is moveable.

The auditorium decoration repeats the stepped motif of the facade, the ceiling stepping down to meet the walls at an entablature seemingly supported by pilasters. A wavy Art Deco frieze on the entablature and the perforated panels between the pilasters contrast with the angular theme. The wall panels comprise two elements, a central vertical row of five perforated, fan-like elements on each side of which are a vertical row of six rectangles containing diagonal strapping. The light fittings on the pilasters and proscenium splays are designed as angular vase elements. For Bingara, the Roxy is truly the "Theatre Moderne" (its advertised sub-title).

Reporting the opening performance on Saturday, 28 March 1936, the local newspaper said,
Great admiration was expressed at the beauty of the interior features of the theatre, and the wonderful coloured atmospheric lighting is certainly an innovation to Bingara. Changing from a soft white light to the effect of a rosy sunrise, the theatre gradually faded into soft blue lighting and the show was on.

And, the local mayor
...congratulated the management on their enterprise, saying that the theatre was a monument to the town and one of the finest buildings of its kind outside the city...Mr George Psaltis...received a flattering reception. He said it was the proudest moment of his life...He expressed...his appreciation of the support of the people of Bingara and district, whose friendship and encouragement had given them the inspiration to carry on in the face of all the obstacles that had beset them. They were but the servants of the people and they were out to give them the utmost value for their money, both in entertainment and service.

Overview of the history of the Roxy, published in the Royal Historical Society magazine