Photos > Cafes, Shops & Cinemas > Shakin' all over: how a Sydney milk bar brought the milkshake to the world

Shakin' all over: how a Sydney milk bar brought the milkshake to the world 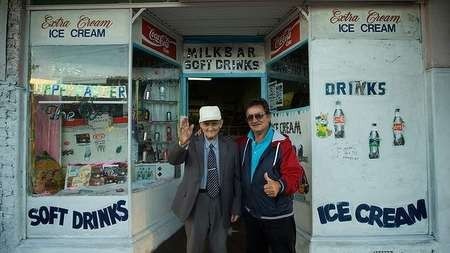 George Poulos, 90, with his son Nik, has owned the Rio milk bar in Summer Hill since 1952. Photo: Wolter Peeters

More than 80 years ago, when Joachim Tavlaridis opened his Black and White Milk Bar in Martin Place, the Greek migrant started a craze for the humble milkshake that swept Australia and, say researchers, popularised the iconic drink in the US.

The milkshake was promoted as a health food. But he also made a riskier version laced with rum called the ''bootlegger punch''.

On the first day the Martin Place establishment opened, in 1932, Tavlaridis' milk bar attracted a phenomenal 5000 customers, who piled around his counter to drink the tasty concoctions.

''Within five years of the Black and White milk bar opening in Martin Place, some 4000 milk bars were operating in Australia,'' says Leonard Janiszewski, who, along with his wife and fellow Macquarie University researcher Effy Alexakis, has tracked the development of the milk bar.

''There was a steady rise in the popularity of milkshakes from the 1930s.''
It took until a little later before the milkshake  known simply as a shake  took off in the US, but the researchers say it was, at least indirectly, Australia that triggered the mass appeal of the iconic beverage in there.

''US servicemen who came to Australia in the 1940s started drinking milkshakes here,'' Janiszewski said. ''In the same way that they introduced instant coffee to Australians, they took the popularity of the milkshake back to the United States.''

By the late 1950s, milkshakes rivalled tea as the most popular beverage, Janiszewski says. In those days, the milkshake was seen as a safe social choice for men to have with women in public.

It touched the lives of all Australians  males, females and youth,'' he said.Families and the youth culture embraced the milkshake as an enjoyable, affordable treat  a symbol of modernity and the good life.''

By the 1970s, the milkshake contained ice-cream, sugar, artificial colours and flavours.

Ninety-year-old Greek migrant George Poulos, who has been running the Rio milk bar in Summer Hill since the mid-1950s, still works six days a week from 9am till closing hour at 10pm. His only day off is Sunday.

He remembers selling hundreds of milkshakes during earlier days when the local picture theatre was thriving. He now runs his milk bar on his own.
''It keeps me young,'' he quips. ''I'm still making milkshakes.''