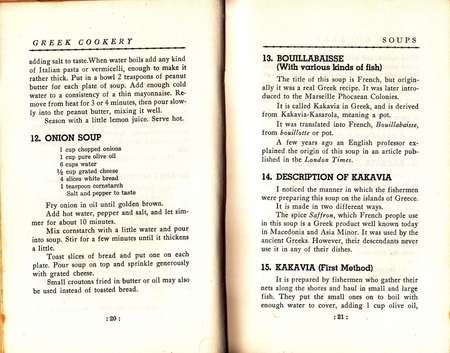 After producing Aphrodite and the Mixed Grill: Greek Cafés in Twentieth-Century Australia (2007), her enduring interest in the singularly Australian phenomenon known as the Greek café turns here to the influence of Greek migrants on Australian cuisine. Toni is Food Area Chair of the Popular Culture Association of Australia and New Zealand.

From the days of the gold rushes, migrants have brought to Australian tables foods from all over the world. Amid the smorgasbord of dishes from Italy, China, and India, however, Greek cuisine is underrepresented. Even today, Greek dishes are less likely than pizza or Asian stir fry to be cooked in Australian kitchens and Greek restaurants are less prevalent than those of other ethnic communities.

This article uses cookbooks of the 1950s, 1960s, and 1970s to chart the relatively slow progress of Greek cuisine across the Australian culinary landscape, and community cookbooks, personal recipe books and personal interviews to provide further insights about the meaning of ‘Greek food’ and about the real impact of Greek cooks on Australian cooking. The influence of Greek cuisine may be less obvious than that of Chinese and Italian cuisine, but it is evident in methods of preparation, rituals of consumption, the use of lemon juice and olive oil, and the desire for simple fresh ingredients – these factors comprise the essence of true Greek food.

Australia is a culinary league of nations, and this is due partly to immigration. If pioneers dined on Slippery Bob (kangaroo brains) and the likes of Fricassee of Cockatoo and pitchcocked Opossum when food was scarce, early colonists generally maintained British traditions and culinary practices (Daunton-Fear & Vigar 1977: 6).

According to Richard Daunton-Fear and Penelope Vigar, a ‘gastronomic revolution’ began when the world flocked to the goldfields in the 1850s: ‘On the diggings, side by side with the sturdy English-style pubs and eating-houses, arose establishments catering for other nationalities. Australians tasted for the first time such dishes as spaghetti and chop suey, and saw how foreigners prepared their food’ (1977: 15).

Greeks joined the gold rush and, like Chinese and Italian migrants, had a significant impact on Australia’s food industry. In the 1880s, they began operating oyster saloons and refreshment rooms, and their province soon spread to confectioneries, fish shops, fruit shops, cafés, milk bars, and, ultimately, takeaways. Even in the 1980s, when they represented less than 2 per cent of the total population, Greek Australians owned one third of all takeaway shops in Australia (Collins et al. 1995: 44-45, 63-65, 82-3).

Despite this, Greek cuisine was not evident in home kitchens and urban restaurants until the 1970s, and Greek restaurants are still uncommon in country towns. Cookbooks of the 1950s, 1960s, and 1970s offer a means of charting the relatively slow progress of Greek cuisine as it ventured across the Australian culinary landscape, and of understanding some of the nuances of its journey to our tables. Trade books document the way in which continental recipes were represented, where publishers believed people’s interests lay, and what Australians may have eaten, and community cookbooks, personal recipe books and interviews provide further insights.

Compared with other ethnic cuisines, Greek food was slow to penetrate Australian culture. The British Raj exposed the English to curry. Tinned spaghetti was one of the first items Heinz produced when it began manufacturing in Australia in 1935, and pizza and spaghetti became so widely accepted that Australia’s first Pizza Hut opened in 1970. Australians frequented Chinese café/restaurants in capital cities from at least the 1950s, and most rural towns have long boasted a Chinese café. Australians accepted what they called ‘chop suey’ cuisine and embraced takeaway spring rolls and dim sum, and the 1960s saw the rise of Chinese chefs and cooking classes (Shun Wah & Aitken 1999: 11, 14, 53). Hostesses concocted ‘Chinese’ dishes with jars of Golden Circle’s Sweet ‘n’ Sour Pineapple and recipes from The Golden Circle tropical recipe book (1963).

Melbourne has a large Greek community, but few of the Greek shops in Lonsdale Street operated prior to 1970; the proprietor of Tsindos Restaurant recalls only four or five restaurants at that time. It would be another 30 years before a Souvlaki Hut appeared.

From the 1920s to the 1960s, Greeks cafés thrived in every city and country town in the Eastern states, but they were synonymous with mixed grills and milkshakes, and their widespread success delayed the progress of Greek restaurants. Greeks did not serve Greek food; they catered instead to British-Australian taste and the gustatory aspiration of ‘meat ‘n’ three veg’ (Risson 2007).

Greek proprietors, known as ‘dagos’, claim that they served ‘Aussie tucker’ because they ‘wouldn't have made a penny’ otherwise and would have been ‘lynched’ for offering something like spinach pie (Growing up in Greek cafés 2004). One-time ‘cafe kid’ Con Castan claims that serving Greek food ‘was inconceivable until about [30] years ago; no self respecting Australian would touch ethnic of any kind’ (Growing up in Greek cafés 2004). Thus, the migrants who were likely to introduce Greek cuisine were busy employing American food-catering technologies like the soda fountain and the milk bar and popularising American foods like ice cream and hamburgers (Janiszewski & Alexakis 2003: 2).

The Greek café is implicated in the fact that Australians knew little of spanakopita and tzatziki until relatively late in the twentieth century.

Read the remainder of the article by viewing / downloading a copy of Souvlakia’s journey: a Greek-Australian food odyssey, in its entirety, here: