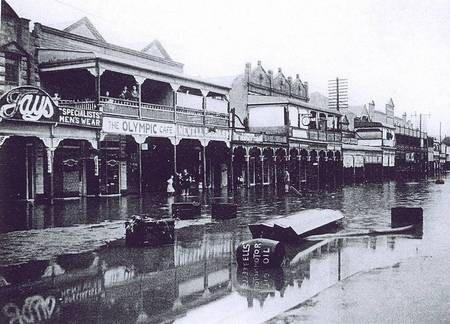 Amongst those on the balcony is probably Jack Cos Aroney contemplating his future after suffering his third severe flood in as many years. Shortly afterwards he decided enough was enough and moved north to Southport, where the rain continued unabated for another 8mths, keeping the vital Brisbane holidaymakers and their wallets at home. He was tempting fate when he shook his fist at the sky and shouted ‘Why me Lord?’ before selling out to Jim Fardouly and sneaking south to chance it in Goulburn, where 12mths later he was burnt out. (Dontcha love the Lord’s wicked sense of humour.)

He then tried a brief sortie into Wagga, followed by a short sojourn at Bundarra with his relocated brother Jim, prior to trekking on to Talwood, west of Goondiwindi, where the Lord, unappeased, sent dust storms every second day. Under the cover of dust and darkness he snuck out to Cooroy on the coast, but the Lady upstairs quickly tracked him down and, still in a jolly mood, sent the Depression. On the Eighth Day the Grand Comedienne rested, eventually showing some of her mythical mercy after Jack had bunkered down in Sydney, where she left him unmolested for the rest of his life.

In the meantime the Olympic was redubbed The Belle Vue Café by Nick Antonios Coocooles (Koukoulis of Katsoulianika), who also took over the other ex Aroney café, The Tweed River Oyster Saloon, in 1922 from the short lived partnership of Emmanuel Jacob Haros (Haroupoulos from Manitohori) and Emmanuel Harry Mavris (Mavromikhail, unknown origin). But shortly afterwards the entrepreneurial Nick installed managers in the joints while he concentrated on his Tweed Heads and Coolangatta ventures. Initally Themistoklis Kopeleas (Tom Copland), from Brállos, Central Greece, was installed in ‘The Bellevue’, followed by the Kastellorizan Spyros Karpouzis, who seems to have stayed for only a year or so, after which the Bellevue was sold to the Ithacan Vlismas Bros, in whose hands it remained into the late 1950s. It’s still going strong as The Balcony Restaurant.

Nick returned to Murbah in 1932 and 3yrs later took up hands-on management in the Tweed River building, by then known as The Continental Café, but who, apart from George Venery and Angelo Victoratos, was in the place in the meantime is another of Her great secrets. In 1939 he offloaded to Steve and Jack Peter Comino (Douris) and tried his luck in New Zealand.

Shortly afterwards Steve and Jack went into partnership with the Varella Bros and grew the business into Murbah’s largest fruit and veggie wholesaler and retailer. They let the café side of the business slide, moving into the adjacent building and leaving a series of different businesses to occupy the old Tweed River building before it eventually was demolished.

From up there Jack Aroney would have seen the council finally build flood levies, protecting Murbah from all but the worst of the Lord’s temper tantrums.