The Rio milk bar at Summer Hill sells to underbidder for figure around $1.7 million 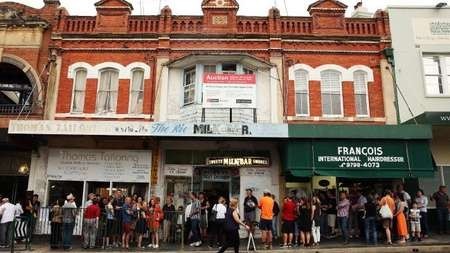 Photograph: The large crowd that turned out for the auction of The Rio milk bar in Summer Hill. Picture: Sam Ruttyn

In its heyday it was the go-to place for greasers, lured by a jukebox full of hits and a steady stream of milkshakes — but the site of famed Summer Hill milk bar The Rio will get a new injection of life after selling for a figure around the $1.7 million mark.

The property at 126 Smith St sold today to the underbidder at an earlier auction, after the initial winning bid of $1.765 million fell through, and it is believed that the new owner secured the property for just under that figure.

Listing agent Michael Garcia from LJ Hooker refused to disclose the sale price but said it was “over the reserve”.

He said the price guide during the campaign had been $1.2 million-plus.

Locals watch the auction from across the road. Picture: Sam Ruttyn

The new owners Tom Alegounarias and Annetta Tourta said they were planning to lease the property out.

“We hope the character of the building will be maintained,” Mr Alegounarias said.

The property had been owned by local icon George Poulos, who died earlier this year, aged 92.

Known to his family as “the General”, Mr Poulos fought in World War II and opened the milk bar with his father Philip after moving to Sydney from Greece in 1952.

His son Nick Poulos said he will miss the store.

Brother and sister Nick and Aphrodite Poulos after the auction.

“I'm delighted naturally and very happy that it’s sold to a Greek family with a similar background,” Mr Poulos said.

“I’ll miss reliving the memories and visiting our dad and doing the shopping with him and coming back watching old TV shows and movies.”

George Poulos and his son Nick in a photo taken in 2013. Picture: Philip Blatch

Mr Poulos’ father opened the store every day, except for Sundays, for 63 years.

“The milk bar was just like the Happy Day series and I was the Fonzo,” Mr Poulos said.

Practice ZOOM the day before