submitted by Australian Broadcasting Corporation on 18.12.2013 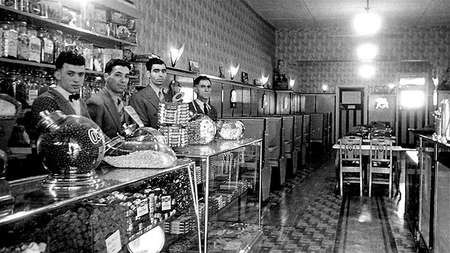 A collection of items from the Busy Bee cafe in Gunnedah is on display at the National Museum of Australia.

In its heyday the Busy Bee cafe in Gunnedah was open between 7am and 11.30pm each day. Customers were offered a printed menu that included fish dinners, mixed grills and steak and chips. But though the cafe was run by the Zantiotis family from Greece, there was nothing Greek about the food.

"There's no baklava, there's no souvlaki - and that's what we would expect now," points out Joanne Bach, curator of Australian Society and History at the National Museum of Australia. "But what they did introduce were the milkshakes, the ice cream sundaes, the banana splits, all those great kind of American desserts ... and that was their real innovation."

From Greece to Gunnedah

Lambros Zantiotis arrived from Greece in 1928, leaving behind his wife and four children until he could afford to pay for their fares. In 1933, after working in a cafe in Gosford, he bought the Busy Bee cafe in Gunnedah, which had been owned by another Zantiotis family.

Son Peter arrived in 1936, followed by wife Anastasia and daughter Anna in 1938. Daughters Kalliopi and Evangelina weren't able to join them until after the war. When Lambros Zantiotis died suddenly in 1953, Peter and his wife Loula ran the cafe until Peter's death in 1996. Loula closed the cafe a decade later.

Items from the cafe in the NMA's collection include vibrant orange, blue, pink, silver and gold anodised aluminium milkshake containers, a straw container and syrup containers, crockery embossed with the Busy Bee logo and a silver teapot, coffee pot, milk jug and sugar bowl.
"These people bought the best quality," explains Joanne, "because they wanted the best for their cafe and they wanted to present a really kind of classy image."

Also on display are a menu, a mirror and some of the original lights that featured at the end of each of the cafe's booths.

"Lambros Zantiotis actually commissioned a Greek shop fitter who did the interiors for so many of the Greek cafes and they were fitted out in the Art Deco style," Joanne says.

The cafe collection tells an important story about immigration to Australia and also reminds us of a once common aspect of life in country towns.
"I think it has great nostalgic appeal," says Joanne. "It does really conjure up a past that's vanishing."