Woodburn, NSW - Kytherian store owner at counter of his store, circa 1922/23. 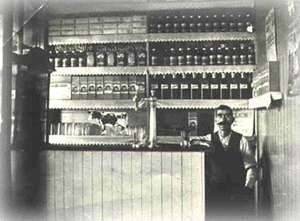 Kytherian store owner at counter of his store at Woodburn, NSW, circa 1922/23.

The cafe owner has not been identified.

Can anyone help to identify him?

To view a larger collection of photo's, including many Kytherian-Australian photo's go to


Thanks to Maria Hill, for allowing us to reproduce Kytherian photographs at kythera-island......


For those wanting to know the exact location of Woodburn:

Small township located on Richmond River, 723 km north of Sydney on the Pacific Highway. It lies south of the towns of Ballina and Broadwater.

The district we now call Woodburn was known as 'maniworkan' to the local Aborigines.

For thousands of years prior to European settlement, the Richmond River and the Woodburn area was inhabited by the Bundjalung Aborigines who survived on the rich mixture of fish, shellfish, wallabies and turtles which abounded.

The cedar cutters who arrived in the area in the early 1840s originally called the settlement Rocky Mouth. Unfortunately Rocky Mouth was already being used elsewhere in the state and the name was changed to Woodburn by William Gollan, the town's first postmaster. This became official in 1896.

There was considerable activity in the area by the 1840s. In 1847 a local timber merchant named Billy Wright employed a shipwright company to build him a number of large vessels. These vessels were launched in the early 1850s and began to ply the Richmond River. A number of ports grew along the river at this time including Wardell, Broadwater and Coraki.

In the early 1860s a township began to form near the present day site of Woodburn. It is believed that William Cravigan, who took up land in 1863, was the town's first settler. Throughout the 1860s and 1870s people settled on the river bank near Cravigan's house. This tiny community had become a kind of township when William Gollan opened a general store and post office in 1868. Shortly afterwards a number of shops and hotels were built and the town had its first policeman by 1879. At this time most of the town's development was occurring on the northern side of the Richmond River. The first significant building on the southern side was the Presbyterian Church which was completed in 1869. The following year a school was built nearby. During the 1870s the whole area became an important sugar growing area.

Such was the activity on the Richmond River at this time that Woodburn grew into an important port. In 1884 the Woodburn Court House was opened and the following year Woodburn was formally proclaimed a village.

Perhaps the most interesting of all the developments around the town occurred in 1882 when a number of Italians settled near Woodburn. 'In 1880, the ill-fated Marquis de Rays expedition of 340 hopeful migrants from Veneto, Italy, sailed to make a new home in New Ireland (now part of Papua New Guinea).

'Here they struggled against fever, starvation and the jungle, and many died. After four months the survivors made their way to Noumea and sought aid from the Government of New South Wales. The Premier, Sir Henry Parkes, arranged their safe transport. They reached Sydney on 7 th April, 1881. A number of them came to this place and built a happy and prosperous settlement, which was called "New Italy". Nothing now remains of their homes. But the quiet pride, the courage and strength of these Italian pioneers will always be remembered in this district with respect and gratitude.'

Woodburn has continued to be an important river port. However, as the importance of transportation along the Richmond River has declined, the town has become less important. Today it survives more because it is on the Pacific Highway and therefore is a stopover for travellers making their way from Sydney to Queensland.