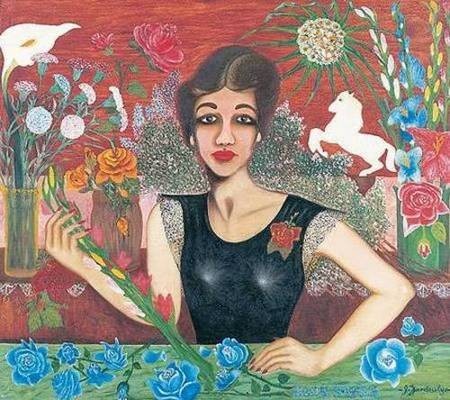 James Nick Fardoulis, 1900 Potamos – 1975 Brisbane, landed 1914 and went to Warwick to join his uncle, Mick Charles Catsoulis. He also spent some time in Bellingen, Tamworth and Stanthorpe prior to he and his brother Stathis following Catsoulis to Goondiwindi in 1916. They subsequently bought the business, but around 1922/23 James seems to have split from Stathis and taken the road to Southport to acquire Jack Cos Aroney’s cafe. (See Golden Gate café photo at http://www.pictureaustralia.org/apps/pictureaustralia .)
The Southport venture only lasted a year or so, but the experience decided him against pursuing the art of cooking. He subsequently spent many years in the travelling theatre business before settling in Brisbane in ~1940 to become a taxi owner/driver. His art slowly evolved over the following years as he lived a bohemian lifestyle in the circle of Blackman, Churcher, et al, but flourished after he gave the driving side of the business the flick. His ‘naïve style’ became very well known and features in various art books and galleries. The National Gallery in Canberra holds four paintings.

The following interview, conducted in 1972, appeared in an art book, the details of which unfortunately went unrecorded. Thanks to the art lover Gaye Hegeman (granddaughter of Theo George Andronicos of Narrabri, Boggabri, Coonamble and Brisbane) for the transcript.

The author’s two page preamble finishes with:
The visit to Fardoulys occurred in 1972. I was not to see him again. I was immersed in a legal practice at the time and had difficulty completing the manuscript of this book. Not long after my visit he wrote a letter to Barbara Blackman, part of which I quote as an example of his style and personality. It is written in a flowing script, slightly uneven, with frequent underlinings (I have altered the punctuation where absolutely necessary).

Dear Barbara,
I don’t know if I wrote to you that my brother Peter got killed by a taxi 3 weeks ago tonight – I miss him terrible – a very humble man – he left no will and about $2000 – so all the sharks are in for the kill. I am not worried for the money – but it’s disturbing Barbara. Very humble and proud to be his Brother (Peter my brother).
Roy Churcher is going to Europe – he was here collecting letters of introduction to my island Kythera … I gave him the Bishop – the School Teacher – (I was the scholar of Greece at 12 years of age) – the Magistrate, the President of the Community of POTAMOS (my town) the Bank Manager, the leading Doctors & Hospital Staff & two Good Legal men. HOW is that Barbara?!
I have a Daughter in Sydney Shirley by my first marriage – Good Girl Barbara … you try and find her for me in the Electoral Rolls Barabara – Shirley FARDOULYS.
Don’t worry about the Book – I have got plenty – I will try & get your painting for Xmas, Burke and Wills 1870. I finished Migration to Gympie 1850 – one of my Greatest ever (Beautifull). My solicitor-barrister bought it on my conditions – no delivery before Xmas. I want the poor masses to see it. You see Barbara I am for the people and not Dictatorships!!! We have one right here! I am looking for someone to write my memoirs – it will be terrific – nobody knows my life.
Ask Charlie & the other Gentleman about it. I can get plenty here. The Melbourne Critics call my work a continuous Colourful Pantomime – and all my Collectors have one of mine over their bed – Margaret Carnegie has over her Bed my original Self-portrait. I said to her What about Doug? The husband? Oh – she said My dear Jim, he loves you too. Who cares.
I am very proud as a human being but I am also the Poorest Greek in Australia but you know the Rest.

Love to all
From Jim & Claire

‘You know the famous Spartans’ appears to be the title of the piece.
James was a prolific letter writer to politicians, one of which was to Mr Opperman, Minister for Immigration, in 1964. Love his opening style:
‘Now Mr Opperman – listen carefully – I am from Greece, came about 1914….. Now go back Mr Oppenman and ask the attorney-general – and the Minister for the Interior to show you my correspondence this week….’
What chutzpah and verve!