submitted by National Archaeological Museum on 25.03.2012 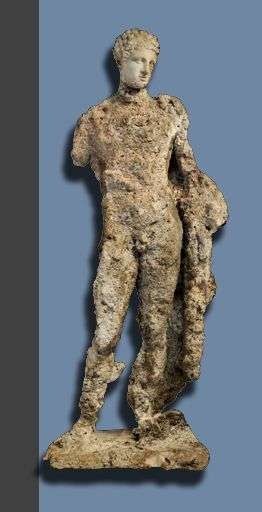 [An artefact from the Antikythera shipwreck]

Provenance: Antikythera shipwreck. From the material retrieved in 1900-1901

The life-size statue of Hermes is fully restored with its inherent plinth. The surface of the statue, particularly its right side, is severely eroded by its having long been in the sea. A low, plain base with depression for the plinth has been considered to belong to the statue.

Remains of the himation are preserved on the left shoulder; the part of the garment that covers the left forearm and falls vertically down to the ankle is preserved in better condition, making the two vertical parallel folds clearly recognizable.
Despite its corrosion and the small difference in the right leg, which is set rather close to the left, the statue doubtless belongs among the Late Hellenistic variants of the Hermes Richelieu type. The rendering of the hair, which focuses on creating an impression rather than depicting detail, is characteristic for this period.

The statue of Hermes belongs to the first category. Its bronze prototype, the Hermes-Richelieu type, dates to ca. 360-350 BC. Its possible creators are believed to have been Argive-Sicyonian sculptors of the "third generation" of successors in the Polykleitan School such as Kleon, Alypos, and Polykleitos III, all of whom were stylistically "on the path to Lysippos". The Antikythera statue, together with the portrait statue from Messene and the variant from Melos now in Berlin, which is a work by the Parian sculptor Antiphanes, are ascribed to the very small group of Late Hellenistic variants of this type, the majority of which dates to the first two centuries after Christ.

The underwater investigations carried out in the area of the Antikythera shipwreck have to date yielded a group of twenty glass vessels, wholly or fragmentarily preserved. This number, however, should not be considered the final count, since the ship's entire cargo has not been retrieved. Future excavation is sure to bring more objects to light, enriching our knowledge and illuminating previously unknown facets of research on glass and glass artifacts.

Βibliography (with references to the previous one):

THE MIGRATON MUSEUM OF AGIA PELAGIA, KYTHERA   Join us for  our next GLOBAL ZOOM to hear exciting new developments about the Migration...