submitted by Kytherian Newsletter Sydney on 27.03.2014

Magiros making a name in Sochi 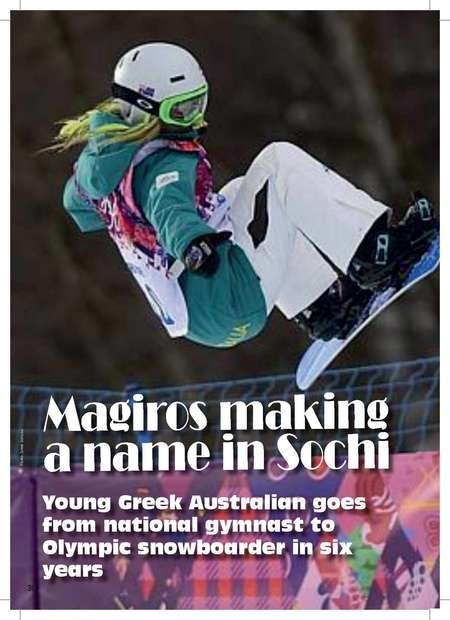 For young Sydneysider Stephanie Magiros,the Winter Olympic Games in Sochi will certainly be remembered for her Olympic debut last Wednesday.

And according to media reports from the Russian town, it seems that the Greek Australian professional snowboard halfpipe rider is doing everything to remember it.

“She’s the one with feathers in her cap and gold eye makeup and a great, big smile that no brutal half-pipe can remove,” the News Limited wrote earlier this week.

She’s certainly not her idol, silver medallist Torah Bright, but from the
Australian snowboarding women’s contingent, she was the only one apart from Torah to make it past the heats, before crashing out in the semi finals.

Still, on her social media account, Stephanie Magiros rated her Sochi experience as a 100 out of 10. Before Sochi, the former gymnast’s best achievement was 10th at a World Cup event in Park City, Utah last year.

The same goes for her supportive family, that was in the crowd watching
her last Wednesday. Not only were her parents Harry and Helen and brothers Peter and Victor there, but in support of their granddaughter, her septuagenarian grandparents travelled to Sochi as well.

Stephanie’s great aunt made it to Sochi to cheer her, straight from the island of Kythera. “We booked our tickets a year ago - we had to be here,” her father Harry said.

“My parents, 73 and 74 years old, are absolutely stoked they’re here. They came all this way - my dad even brought his sister here from Kythera.” “Now I’ve got to drag them up the mountains,” Harry told media.

A top level national gymnast Stephanie Magiros performed in the Closing
Ceremony of the Sydney 2000 Olympic Games when she was nine years old. Six years ago she had a frank conversation with her dad. She had tried snowboarding for the first time. “I know how I’m going to get to the Olympics, dad, I’m going to snowboard.” And that was it.

The teenager got a snowboard, and began chasing the Olympic dream. Since then, her dad describes a journey filled with “a lot of hard work, dedication and obsession.”

Stephanie was officially selected to join the Australian Olympic team just few weeks before the Sochi games. Last Wednesday, the grandparents saw Stephanie compete in a Snowboard Halfpipe for the first time.

“It’s my dream coming true, to have them right there next to me,” she said. With a stint cheerleading for the NSW State of Origin side behind her, Magiros is now accustomed to back-flipping with 10kg of boots and
a snowboard strapped to her feet. And gymnastics training helps her in this.

“All of my air awareness training from gymnastics helps so much when I do tricks - it doesn’t matter that I have a snowboard on my feet.” And with the support of her Kytharian family, and with young Steph’s ambition, no wonder she reached this far.