Photos > Sporting Life > Spyro Calocerinos with the president of the Greek community of Albury Tess Andronicos and her husband, Nick

Spyro Calocerinos with the president of the Greek community of Albury Tess Andronicos and her husband, Nick 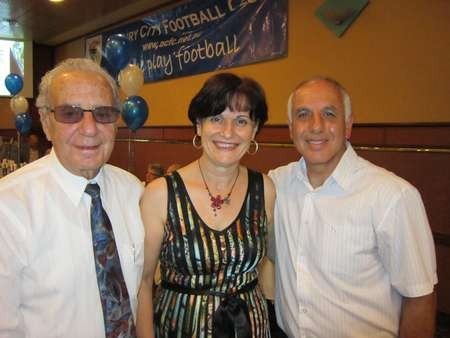 14th of February 2014. I was in Albury to attend the 40th Anniversary celebrations, of the formation of the Albury City Soccer Club. A formal night was organised by the committee, and being the first President of the Club, I was invited to attend. I went and I was amazed at what the Club achieved during those last 40 years.

"According to a contract I had with the Company I was working with at the time, I was posted to Albury in NSW, in the early 1970's. I re-located there with my family, and we stayed for three years.

One of the important things for me was that the City of Albury had a Greek Church which was built mainly by Kytherians. When a priest (Father Agelakos) arrived, the Greek citizens were happy that a temporary priest arrived so he could also teach the children Greek and obviously do the service every Sunday in Church. As the Church was built a long time before, a priest would service the church one Sunday per month. Now there was a priest every Sunday therefore, it was a bit hard to get people to Church every Sunday. I suggested to the priest that with the children (mainly young girls) we could start a choir, therefore the parents and friends would come to listen to their children. I undertook the responsibility to do that and very soon we were getting many more people in Church, but not many of the young boys as they were out in Parks kicking a football or just playing.

I suggested to the local Kytherians that we should form a football club as I noticed that there were a number of boys that really were very good with the ball, and their feet. With the assistance of the shopkeepers (mostly Kytherians and Antikytherians) we went ahead and eventually managed to get the team in a park. We formed a temporary committee and we elected the late Steve Galanakis as the temporary president. I was doing a lot of work and as we managed to get the team into the local association. We held elections and I was elected as the first president of the club.

So on the 14th of February 1974 , Albury City Soccer Club was formed. On the 14th of February 2014 a formal night was organised by the committee, and being the first President of the Club, I was invited to attend. I went and I was amazed at what the Club achieved during those last 40 years".