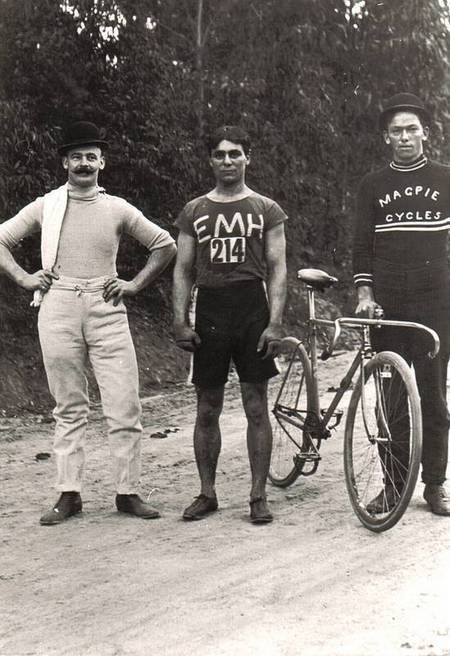 Long distance running is as old as the Ancient Olympics. The marathon in particular evokes the traditions and glories of Ancient Greece and is run by athletes with incredible stamina and endurance.

One of Kythera’s own sons became an accomplished marathon runner and walker in the early part of the twentieth century and almost represented Australia at the Stockholm Games in 1912. In the words of one journalist, he came to be regarded as “one of the finest all-round endurance runners and walkers that this country has ever known”.

Ioannis Gerakitis was born in Kythera in 1893 and came to Australia as a young boy. He assumed the name of Jack Lewis (presumably adapted from his family’s nickname “Glous”). He was of short statue and muscular build. As one reporter observed: “He is only a handful but his little frame is packed with healthy muscular tissue, the blood courses clean and warn under his brown skin. The sun has bleached his strong, even teeth, for a laugh of joy is scarcely ever off his lips. There is a spring in his heels as he pads through the little known, tangled bush. Every step brings new adventure, every bird, beast and insect holds new interest.”

In Sydney Jack Lewis joined the Sydney Harriers, an amateur club of long distance runners based in Newtown. His first official race was the 1909 New South Wales Marathon in which he finished a respectable third. He then moved to Victoria to look for work and joined the East Melbourne Harriers. In 1911 the young Greek won the third Victorian Marathon in just under three hours and was the youngest to have won that event at that time. According to one newspaper report:

“Jack Lewis is style itself, moving with perfect grace and ease. But he owes this to no natural gift. This is a redit to his determination to excel. He has carefully cultivated an easy, graceful style, knowing that jerk and friction are fatal to speed and endurance”.

On February, 26 1911 Jack Lewis received an official letter from the Victorian Amateur Athletic Association confirming that his name had been submitted for selection as a member of the team to represent Australasia in the marathon race at the Olympic Games to be held at Stockholm in July, 1912.

Indeed, there was considerable supportfor him to be included. In the view of the Sporting Globe newspaper, Lewis “is the type of man to whom Australia must look – a superman as far as physique and stamina are concerned”.

That he did not represent Australia was put down to a lack of funding but, according to family sources, the real reason appears to have been that Jack Lewis was required to renounce his Greek citizenship and become a British subject. Although Jack expressed a desire to run at the Games, he was not prepared to discard his Greek identity.

In the following year Jack Lewis returned to Sydney to take part in the Marathon championship of New South Wales which was held on 3 June, 1912 and where he finished second.

Jack Lewis then turned to walking and won the 1922 Victorian 25 mile championship. Newspaper reports at the time hailed him as the “Grecian Champion” and a fine walker, “one out of the box”. At the end of his long journey it was recorded that Lewis “laughed and jumped with his friends and was as delighted as a schoolboy. He looked as though he could have repeated the performance easily”. In fact, he was examined after the event by the race doctor who found that his heart pulse beat was slightly over his normal beat.

After his 25 mile walk triumph, Jack Lewis was acclaimed as a true champion and his success in athletics and life was attributed to “grit and optimism”. In the Sporting Globe issue of 27 September, 1922 Frank Brown wrote a piece under the headline “Happy Jack”:

“Bravo! Bravo! Jack Lewis”. A crowd of Greeks, countrymen of the winner, crowed round him and cheered the happy laughing little man. They claimed his prowess to the wide, wide world in rich, strange language and extravagant gesture. He was kissed and carried shoulder high through the laughing, cheering crowd to the dressing room: it was a great moment for Happy Jack; it was a great moment for his countrymen.”

According to another reporter who covered the race, Jack Lewis “seemed quite unconscious that he had performed an athletic feat of any merits … he did not show a sign of exhaustion, and had I not seen him in action only a few minutes before I would have found it hard to believe that he was a competitor”.

Jack Lewis then went on to win the Australian 50 mile walk in 1926 held in Sydney with a time of 9 hours, 20 minutes, 24 seconds, which smashed the then Australian record by 49 minutes 16 seconds. In 1928 he achieved further glory by winning the ten hour marathon walk in Victoria – the longest race ever held in Victoria to that point. A fellow competitor later recalled that Jack’s stamina was remarkable and he ended up walking 53 miles, three miles more than the second-placed competitor. By this stage Jack Lewis was widely regarded as the champion long-distance walker of Victoria.

But there was also a life away from sport. Jack Lewis was a forest ranger based near the Warburton Mountains in Victoria. Described as “Jack of the Mountains”, he was reputed to know the area well because he had literally walked over the whole mountain. Lewis was reported at the time to have averaged about 200 miles a week walking whilst on the job. He told one reporter that he measured the life of his boots by distance, not time and reckoned that he got about 3000 miles of each pair. According to Lewis, walking in the bush was the “best medicine”.

Jack Lewis was also a very unassuming fellow and used his local bush knowledge and athletic stamina to fight bush fires and finding and rescuing people who had become lost in the wild. His exploits were well known and he was highly respected. According to one of his contemporaries, Jack Lewis “never considered his own comfort, but at any hour would walk into the heart of the forest on trails unknown to most people to search for some soul who had lost his way”.

In 1931 he was specially commended for his efforts in looking for the missing aircraft, the “Southern Cloud”. The citation by the Melbourne and Metropolitan Board of Works recorded its appreciation at the “hardships endured by Mr Lewis in his self-imposed task, involving a great deal of sacrifice on his part” in searching for the downed aircraft in treacherous mountain country.

As a ranger and bushman, Lewis’ knowledge of botany was almost unparalleled. He collected and exchanged specimens of local timbers and wild flowers with schools throughout the world.

Jack Lewis died on 2 June 1956. It was said of Jack Lewis, the Grecian Runner, that his “courage, resourcefulness, devotion to duty and kindness have earned for him a niche in the hearts of all that no other can hope to fill”.

Perhaps recalling his Kytherian roots, for Kythera is an island made for walkers, Jack Lewis, when interviewed in Melbourne prior to a big race, expressed an uncomplicated view on long distance walking and running which evidently flowed over in to his outlook on life generally:

“When you are fit you are happy. When you are happy you are good. You don’t want to do anything mean. I will be glad to get back to the hills. I do not like the air down here. Sometimes I live weeks by myself in the bush, but I do not mind that. I exercise just the same, and it is fine to be swinging along through the bush with the big gum trees overhead. Doesn’t matter whether you have money or not. You have health and the joy of life. That is everything.”

Ioannis Gerakitis (aka Jack Lewis) was a legendary runner who deserved to go and almost got to the Olympic Games. He was also a great human being – the pride of Kythera - who touched the lives of all those who knew him.

Note: The writer wishes to acknowledge the invaluable assistance and research efforts of Tas Psarakis and Petro Cassimaty of the Australian Hellenic Historical Society (“AHHS”). The numerous newspaper clippings and other archival material provided by the AHHS were obtained from Betty Comino whose assistance is also gratefully acknowledged. A summary of Jack Lewis’ exploits is also contained in Vol. 1 of Hugh Gilchrest’s excellent work, Australians and Greeks (1992, Halstead Press) at page 260.