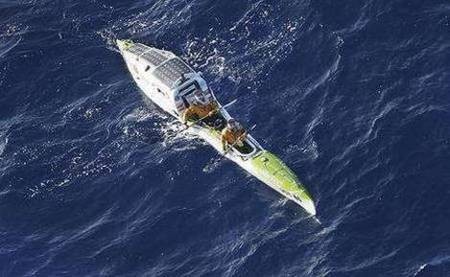 New Plymouth, in New Zealand … James Castrission and Justin Jones said their leg muscles were wasting away from weeks of sitting.

Exhausted - and the worst is still to come.

Two Australian kayakers who are nearing the end of their epic voyage across the Tasman now face the most dangerous part of their journey.

Sydneysiders James Castrission, 25, and Justin Jones, 24, are expected to arrive on the west coast of New Zealand on Sunday after almost 60 days paddling at sea.

But as the exhausted pair near land they might have to battle waves up to five metres high, kayak expedition spokesman Tom Mitchell said.

They have travelled more than 3000 kilometres and are now about 130 kilometres from their landing zone in New Plymouth.

"They are coming over the continental shelf; it's the most dangerous part of the mission," Mr Mitchell said.

"The depth of the water goes from about 2000 to 200 metres, the swell goes from being a non-issue to one that can potentially create crashing waves that can put them in trouble.

"It can be up to four or five metres high but it's not a guarantee that we will be getting these waves.

"If it chops up a bit, the boys will find themselves in the middle and it will be extremely hard to escape."

Mr Mitchell said the group had considered different landing zones but discovered they would have to deal with the same problem anywhere along the west coast of New Zealand.

Rationing food and well over timetable
The men have also had to ration their food and are eating only one meal a day.

Unfavourable conditions have forced them to paddle more than 3000 kilometres - well over the 42-day, 2200 kilometre crossing originally planned - and they are expected to reach land at New Plymouth about 11am Sydney time on Sunday.

The pair are still out of sight of land but they had their first contact with the real world last night as planes hired by the media swooped over them.

A coastguard officer, Amelia Crowley, spoke to the pair by marine radio from one plane.

Crowley said Castrission sounded excited and full of life as they chatted.
Speaking by satellite phone earlier, the pair said weather conditions on the final stretch were expected to be windy.

"We've got around about 150 kilometres to go now, we've got itchy feet to get on to land," Castrission told Channel Seven. "Fifty-seven days is quite a long time to be on the Tasman Sea."

They have upper body fatigue and muscle wastage in their legs from weeks of sitting.

"Day by day, it's the physical fatigue that we're actually going through and the fact that our minds are not as sharp as they used to be," Jones said.

"Now we're starting to forget things, numbers, and getting our easts and souths mixed up. This whole trip has been about heart and the mental willpower to keep on going."