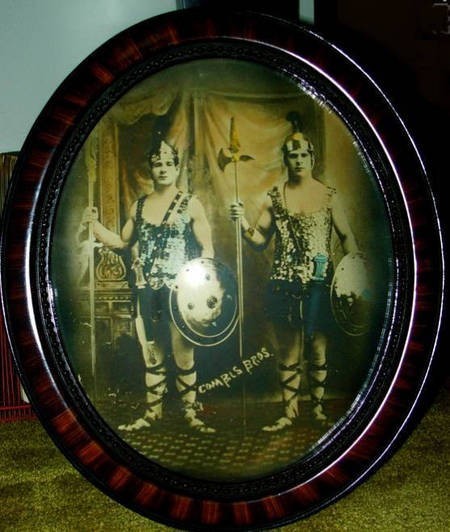 Little is recalled today of the various Greek immigrants who worked in American vaudeville. Chance references in archival sources and rumors within the Greek-American community about these Greek performers abound. After graduating high school I went to visit my grandmother in Tarpon Springs, Florida. There on Ring Avenue in the late evenings my grandmother and I would often visit Mr. Combis and his wife. It was over vanilla ice cream and root beer that Arthur (Athanasios) Combis would talk to me for hours regaling me with the stories and showing me the promotional pictures of the greatest tableaux vivant/strongman act in all of American vaudeville, the Grecian Gladiators.

From 1907 until World War I vaudeville audiences across North America cheered for the nationally famous vaudeville strongman tableau vivant act, the Grecian Gladiators. Athanasios and Theodore Combis formed the core of the act with the aid of internationally recognized strongman fellow Greek, Demetrios Tofalos. These men toured the vaudeville houses of North America during the Golden Age of American Vaudeville. At a time when Greek immigrants were struggling against all forms of abuse and hardship, these three Greek vaudevillians offered a heroic image of the glories of Ancient Greece to the society at large.

Given the transformations in American theater since the heyday of vaudeville, a tableaux vivant performance needs description. Someone, usually a shapely girl in tights, would slowly walk across the length of the stage carrying a sign with the title of the tableaux. Next, after a dramatic musical introduction, the house lights would go out and the stage curtains would open. Then, with a sudden burst of thematic music, all the lights would be instantly turned on.

There on the stage would be the tableaux artists in elaborate costumes assuming unmoving poses. Magnificently painted curtains served as background to the actors and their props. Sometimes, depending on the scene, the actors, after a moment or two of remaining in position, would move suddenly into a second dramatic pose and then freeze again. From the mid-1880s, tableaux vivant which means “living pictures” were also known as “living history” performances. This was the case because these costumed scenes were invariably based, however loosely, on famous historical events. All of these productions featured a costumed actor or actors representing some widely known historical figure or event as if they were a ‘living statue.’

The Grecian Gladiators were artistic innovators. Dressed in classical Greek togas and full-body armor, these three Greeks combined the Victorian style tableaux vivant with daredevil gymnastics and astonishing feats of strength. Wearing sixty-pound suits of armor, plumed helmets, spears, swords, and with a paired team of pure white stallions., the Grecian Gladiators criss-crossed the America as the very embodiment of classical Greek athletes.

The full sequence of routines that composed the standard ten-minute act are no longer remembered. Since, at any given theatre, three shows were played a day, different routines would be performed at one show and not another. If the Gladiators played an extended engagement or at a bigger venue such as the Hippodrome, then much longer, more complicated routines, were performed. Photographs and promotional materials were sent ten days to two weeks before the opening date of the contract or their act was cancelled. This included music for the orchestra. At the height of their popularity the three Greeks received $150 dollars a week.

A standard performance opened with two or more tableaux. Among the Grecian Gladiators most popular tableaux were “At the Walls of Troy,” “Heracles in Chains,” “Heracles and the Snakes,” “Samson and the Lion”and “Chariot races at the Coliseum.” The last tableaux included an actual chariot with its team of specially trained white horses.

The three Greeks had a thrilling vaudeville act where their unique balancing routines always expressed unusual strength and agility. Theodore was the understander (the man on the ground) and Athanasios the topmounter. Demetrios Toufalos also served occasionally as an understander but Athanasios always was in the air. Flips, true neck rolls, balancing on the hands, extended arms, standing on each other’s legs or shoulders, all were executed in complicated two-man and more often three-man routines. In all these gymnastic routines what separated the Gladiators from other vaudeville performers was lightening speed and undeniable athletic ability.

Strictly in terms of feats of strength, the Gladiators broke stones across each other’s chests, snapped chains, bent bars of steel, lifted massive dumb bells, and held volunteers from the audience over their heads in a special chair with a belt. Depending on their mood, and the volunteer, they would sometimes even ‘play’ catch with them. All this three times a day, seven days a week!

One show-stopper was when Theodore held Athanasios up in the air, fully extended with one hand above his head. Theodore then ran down the length of the stage and tossed him to Toufalos. Toufalos caught Athanasios in the small of the back and ran back across the full length of the stage. The two would run quickly all over the stage, throwing and then flipping Athanasios back and forth, until the crowd was shouting and on their feet. Since all three members of the Grecian Gladiators stood over six–feet tall, this was an amazing show of physical strength and outstanding gymnastic ability.

The young Greeks had appeared at New York City’s Hippodrome Theatre before the 1914 season. Yet, in looking back on his career, Athanasios always referred to that specific season with deep nostalgia. It would prove to be the last time the gladiators “played the big time.”

Each season the Hippodrome had a unifying theme that all the acts in some way worked into their performance. Responding to the war in Europe, the 1914 theme was aptly enough “War of the World.” In the elaborate playbill from that season, the Gladiators are credited as the “Olympic Champion Trio.” They performed in the section of the overall program called “Classic Feats of Strength” with their specific act appearing as “Episode VI: The War of Sport.”

Thunderous applause greeted the expended and perfected versions of two tableaux “At the Walls of Troy” and the “Chariot races at the Coliseum.” In both tableaux, the Gladiators had honed the freeze-move-freeze performance to razor-edge perfection. The movements were rehearsed endlessly to coincide with a timed sequence of quick switching on-then-off-then-on again of the stage lights. The momentary flash accented, as it also sometimes hid from the startled viewers, the Gladiators’ movements.

In the “Trojan War” tableau, an extended freeze-move-freeze sword fight played out the killing of Hector by Achilles. In the final blackout, Toufalos quickly brought out the team of horses and, in the final glare of light, Achilles was shown sword on high with Hector tied behind his chariot. Athanasios Combis contended the loudest cheers of all came from the balcony seats. The cheapest seats in the house, these were the local Greeks dressed in their finest, who were nearly thrown out of the Hippodrome for all the uproar they made at the end of this particular tableau.

The “Chariot Races at the Coliseum” tableau was far trickier and had failed more than once in the past. The team of stallions, while endlessly trained, still sometimes bolted with the sudden flash of light or the thunderous applause. On one occasion, when this tableau was being performed in Cleveland, Athanasios Combis had almost ended up in the orchestra pit!

This tableau was a straightforward race scene. What the bold Greeks had added was a freeze-move-freeze-twist. The horses were trained to raise their legs and turn or lift their heads at each flash of the house lights. The Gladiator in the chariot would dramatically move his arms, whip and spear to emphasize the sense of movement. Telegrams kept in family scrapbooks report that William Schubert, the Hippodrome Director, was especially sorry when the Gladiators were signed away by the Flatbush Theatre in Brooklyn. The young Greeks who spent “money like water,” in triumph over their newly enhanced fame never suspected that this would be their last season together.

When the United States entered World War I in 1917, the Grecian Gladiators’ act ended. Theodore Combis joined the United States Army and Athanasios’ wife Dora, who had traveled with the act for five years, wanted to settle down and start a family.

I was never able to determine how long Demetrios Toufalos performed with the Grecian Gladiators. Today, it is probably the case that more Greeks recall Demetrios Toufalos than the two Combis brothers. This is because Toufalos won the 1906 heavy weigh lifting contest in Greece. Demetrios Toufalos was to have a complex career before, during and long after his association with the Grecian Gladiators. Toufalos as a weigh lifter, wrestler, trainer/promoter of wrestlers and if old newspaper accounts are to believed an opera singer! Toufalos became an American citizen in 1921, which is important to note since he is the first and I believe only Greek-American athlete to have a stadium named after him in Greece.

In his birthplace Demetrious Toufalos is remembered by the “TOFALOS Stadium [which] has 5000 seats. It lies 6 kilometers from the center of the city and just 3 km from the hotel where the teams will be accommodated. It is fully equipped, has 10 changing rooms, 6 showers in each changing room for the teams, 3 extra changing rooms for referees, medical facilities, a building control center, VIP room, parking both for VIPs and journalists and for sports fans for up to 3000 cars and of course air conditioning, and media facilities (fax, telephone, etc.) (http://www.eurowomen2003.com/patra.asp).”

The bluster of television glitter seen on the World Federation of Wrestling is a far cry from the demonstrated athletic ability of these vaudevillian strongmen. The Grecian Gladiators were among the true strongmen giants so often written about in histories of American Vaudeville. From men such as George Hackenschimdt, the Russian Lion, or Jim Londos, the Golden Greek, to Demetrios Toufalos, the heavy built Grecian Gladiator who would lift full grown men over his head with one hand and then twirl his handlebar mustachios with the other, were all extremely disciplined men of hard-won physical strength and seasoned abilities.

All Hail the Gladiators!

In reading standard histories of Greeks in North America it would seem that only married men who ran their own businesses and belonged to fraternal organizations, and/or the Greek Orthodox Church ever influenced American notions of what it meant to be Greek. This is simply not true. As self-serving as this institutional “struggle and success” model may be, it is a selected presentation of history.

The claim can well be made that immigrant performers, such as Athanasios and Theodore Combis and their able partner Demetrious Toufalos offered, in a more dramatic and entertaining fashion, an image of who the Greeks were to the working classes of rural and urban America than any other group ever did. The time for recognizing the Grecian Gladiators, and all the other Greek immigrants performers, and to allow them to take their bows on the stage of history is long overdue.