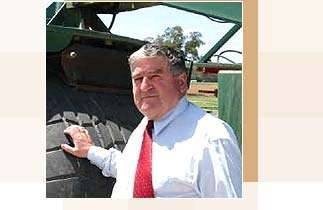 You'll hear Bill Casimaty's name mentioned at the Davis Cup, the Melbourne Cricket Ground, and even Lords Cricket Club. Which would make you think this determined man is a sports fanatic.

But that's far from the truth. Bill Casimaty is in fact one of the pioneers of the turf industry.

Every boom is followed by a bust, and it was the slump after the Korean War wool boom that sent Bill Casimaty in the opposite direction to sheep and wheat farming.

In 1957 he finished studying at Dookie Agricultural College in Victoria and returned to his family's Richmond property, in the Coal River Valley of Tasmania. He was to decide very early on that the property wasn't viable as a wool and wheat growing operation.

From that point on, the property that his father had bought some 50 years before was to be transformed. Bill's father arrived from the Greek island of Kythera at the age of 13, to begin a new life on another island, Tasmania, on the other side of the world. Much to the surprise of the locals, the Casimatys started growing mushrooms.

But the pivotal year for Bill was 1966, when he won a Nuffield Farming Scholarship to study an agricultural pursuit overseas. A college friend of his had set up a turf farm in Victoria, so Bill decided to investigate turf farming in the United States. He was so impressed by this trip to the US and the UK that he came home and bought his friend's farm, and set up the Strathayr Turf business in Tasmania as well.

It was an inauspicious start for a business which would, over the next 30 years, supply turf to some of the biggest horse racing tracks in the world, as well as American sporting stadiums and even the prestigious Lords cricket pitch in England. At home, horses galloped on Bill Casimaty's turf at Moonee Valley, Flemington and Sandown. Footballers flew high for a mark off Casimaty turf at Waverley Park in Melbourne, cricketers dived for the ball on it at the Melbourne Cricket Ground. And Bill was even responsible for a turf trial with Tennis Australia, to lay the surface at the recent Davis Cup final between Australia and France.

Relaxed, sitting back in a wooden chair looking out over his Richmond farm, Bill Casimaty is adamant that the success of his business lays in the hands of research and development. He has scientists working in laboratories trying to solve sporting turf problems.

"We look for sport turf problems, then try to find economic and practical solutions. I suppose it's our R and D that keeps us in front. Science is the essence of good turf – the soil profile is just as important as the visual appeal of good, fast-growing turf."

Bill calls it 'root zone hydraulics'. His attitude – and most likely, the key to his success – seems to be 'if you wait for someone else to find the solution, then you'll never lead the pack.'

Setting up the turf industry in Australia's southern cool climate was always a risky business. In the beginning, Strathayr grew turf for the mining industry on the west coast of Tasmania to protect the slopes from erosion. A local market for residential lawn began to grow, before the company embarked on its first export job. The project required turf to cover one of Hong Kong's largest race tracks. It was grown in Victoria and flown to the customer. Things have changed since those days. Contractors now grow the turf nearby, Bill says, to prevent spoilage and cost blow-outs.

Like many family businesses, there came a day when the founder had to hand over the reins to those with more energy. Bill says he still calls Strathayr home, but these days he is rarely there to absorb the charm of the old property, which includes a restored hop kiln house. His son, Frank, works on the Richmond property and his daughter, Kate, manages the marketing and publicity side of the business from Victoria. Bill says it's now "time to step aside and take on a smaller role."

The job has taken him all over the globe to find new markets. Admiring the view of the lush Coal River Valley from his back yard, he reflects on what has been a fast-paced lifestyle.

It's an appropriate analogy, to describe Bill Casimaty as a man who never lets the grass grow under his feet. Next time you're at a high profile sporting event, take a moment to think about who grew the grass for that multi-million dollar stadium.