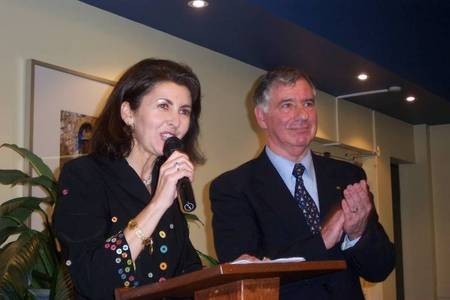 For a brief overview of the Life and Achievements of Professor Harry Poulos, please refer to the People section - subsection - High Achievers - of kythera-island.net.

For impact of the Poulos [Tzortzopoulos] families in the evolution of Katoomba, NSW - see entry under History - General History - Poulos -Tzortzopoulos.

The evening was a sellout, with 150 Kytherians, Greek-Australians and Australians, packing out the restaurant.

The dynamic President of the Ladies Auxiliary Committee, Catherine Economos, made the introductory speech, which provided glimpses into Professor Harry's personal and familial life.

Good evening ladies and gentlemen, it gives me great pleasure to be speaking on behalf of the Kytherian Association of Australia.

In Shakespeare’s Henry IV, Falstaff asserts that “the better part of valour is discretion”. Perhaps, if Shakespeare were writing today, he would pen a similar verse about Emeritus Professor Poulos. For he would go a long way before he would find a better example of a man who has discretely gone about his work, achieving world class excellence, while seeking little fan fare.

For whenever you meet someone who knows Professor Poulos, the one comment they universally make, is that he is such an unassuming man, a man of great discretion.

It is this very quality of discretion that makes it doubly important for us as the Kytherian Association of Australia to conduct an evening such as this.

For it is important to acknowledge that within the extended Kytherian family, there are people achieving wonderful things and it is our role as an Association to convey these achievements to the wider community. But perhaps what makes this evening even more special, is the fact that these personal traits of Professor Poulos, show that he is a man driven not by personal gain, but simply by the idea of achieving excellence.

Professor Poulos, we feel fortunate as an Association to have a man of your calibre borne out of our community.

When it was suggested to the Committee that we hold a Testimonial dinner for Professor Poulos, the idea was unanimously embraced, as most of us had heard of the Professor and his outstanding achievements, but few of us had been fortunate enough to meet him.

So I set upon the task of tracking Professor Poulos down. With each phone call, I discovered he was in a different corner of the globe and soon realised just how much in demand he really is.
Professor Poulos was born in 1940 in Katoomba, the second son of George Poulos, and Eleni Zantiotis originally from the village of Karavas, Kythera.

George Poulos, like so many of his generation, joined the wave of migration and became part of the Kytherian diaspora. He arrived in Australia in 1926, leaving behind his wife Eleni and young son Theo.

In Australia, George joined his brother and two cousins who owned the Niagara Café in Katoomba. Some 13 years passed before the family was reunited. In 1939, after negotiating Australia’s immigration restrictions and surviving the depression of the ‘30’s, Eleni and by then 14 year-old son Theo, arrived in Australia. Harry was born the following year.

Reunited, George and Eleni set about creating a family home for their sons. George, a well-liked, gentle man, worked in various Katoomba establishments and Eleni, a talented woman, filled their home with handicrafts she created with flair, and meticulously tended her beautiful garden. Eleni will turn 100 this year and we know how very proud she will be feeling tonight.

It is also worth noting that Eleni’s mother, Professor Poulos’ grandmother, who joined the family in Katoomba, Stamatina Zantiotis, was also a lady of extraordinary ability, who was able to recite passages from any part of the bible.
_ _ _

Professor Poulos spent many hours of his youth kicking a ball around the backyard and avidly reading whatever children’s books came to hand. In fact, I’ve had stories recounted to me by cousins of Harry who, as children, scurried to hide their favourite books when they heard Harry was coming over, for fear they’d be borrowed, and not returned. This was the beginning of a lifetime of book collecting. His love of reading continues to this day, filling the many hours spent travelling the globe in his work as a consultant for Coffey Partners International.

In Katoomba, Harry learned to play the saxophone and violin, but it was the guitar that was to prove his forte. He joined a musical group and played regularly. At school he grasped concepts easily, but when challenges presented themselves, he had a unique way of dealing with them. He would lock himself in his room and play his guitar. When he emerged, the problem was solved.

Though never pressured by his parents, Harry duxed Katoomba High in 1956. After finishing school, he considered undertaking a pharmacy degree. But to do so, he first needed to obtain an apprenticeship. Luckily, he was unable to find a pharmacy with a position to fill. A simple comment pointed him in a direction that would change the practice of engineering and construction globally. “You’re good at maths - why don’t you do engineering” a teacher fortuitously remarked.

At 16, Harry Poulos moved to Sydney as the houseguest of his uncle and aunt, Angelo and Stella Zantey and entered Sydney University. He completed his undergraduate degree within four years achieving 1st class honours and followed straight on with his PHD.

Angelo and Stella marvelled at his ability to cope with a noisy household and streams of visitors. Harry studied in his room, classical music in the background, sometimes with two toddler cousins on his knee, if they promised to be quiet. Come midnight, he was known to shut himself in the bathroom so as not to disturb anyone, and play his guitar.

On departing the Zantey household, he presented his prize possession, his guitar, to his young cousin Harry, as a gesture of his deep appreciation for their warmth and support.

It was during his university years that Harry met Maria Langley, a Grafton girl, like himself of Kytherian decent and only sweet 16 at the time. At 19 she moved to Sydney where they met again. Maria invited Harry to her 21st birthday party. Unable to attend, he sent a gift, a pearl on a necklace, with a characteristically simple note, “A pearl for a pearl of a girl”.

Soon after he invited Maria on their first date – attending the very first Beatles concert in Australia, accompanied, of course, by Maria’s younger sister, Theodora.

Two years later he married his pearl of a girl at St George Church, Rose Bay. Over the ensuing ten years, Harry and Maria had four children, George, Elena, James and Peter. These were busy years, with Harry moving quickly up the university ranks, being appointed as a lecturer in the Department of Civil Engineering in his first year of their marriage, quickly rising to the position of Head of the School of Civil and Mining Engineering, researching, writing and delivering ground breaking papers.

But he managed to live a balanced family life by adhering to the maxim “never bring work home on weekends.” He read to the children at night, played cricket at the Bexley Club and Sydney Uni Veterans, collected cats (at one stage I’m told the Poulos household consisted of Mum, Dad, four kids and seven cats), and coaching the boys’ soccer team. An avid sports fan, one of his proudest achievements was coaching son James’s Under 16 Roselea team to the State Championships in 1987, boldly swooping the cup from a professionally-coached team.

Today, Professor Poulos’ family has grown to include seven beautiful grandchildren, with whom he will share many new sporting adventures.

Throughout his academic life, Professor Poulos could be relied upon to deliver brilliantly, without drama. His interests in books which started from a young age continues. His home is filled with books ranging from archaeology, history, art, sociology, philosophy and photography, and he is still adding to his collection.

As a Doctorate student, when asked what he did for a living, he’d answer, “I tinker with machines”. As Emeritus Professor, with a string of outstanding achievements, within Australia and abroad, he remains as approachable, affable and as discrete as ever. In the words of his son James, “I don’t think that there’s person who has met Dad who has not liked him. He is the classic gentleman, polite and dignified.”

Professor Poulos, it has been a pleasure compiling this brief outline of your life …. by all accounts it is a wonderful and honourable life.

On behalf of the Kytherian Association of Australia, I would like to say how deeply proud we are that you are a part of our extended Kytherian family.


....And thank you very much, Catherine Economos, for permission to reproduce your speech. [GCP].

Congratulations to the Ladies Auxiliary Committee, Kytherian Association of Australiam, for organising a superb evening.