Christianos Family of Opaline Pty Ltd, and their interaction with Kytherians 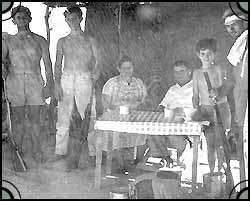 The Christianos family at 8 mile camp Circa. 1957

[I include a background to Opaline Pty Ltd here, not because the founders, the Christianos family were from Kythera. They in fact derive from Halkidiki.

But for three other reasons:

1. Over the years, The Christianos family interacted with a number of Kytherians; including Archie Kalokerinos, Bill Petrohelos, and the Megalos family.
Many Kytherians were involved in this industry - a fact little known and explored in the literature.
I hope this entry will help to elicit a number of Kytherian "opal mining" stories.

3. Opal mining "manïa" reveals the "gambling" side of the Kytherian/Greek Australian character very well.
The Christianos family - "got very, very lucky" - as reading the remainder of this short entry will reveal. G.C.P.]

Opaline is a third generation family opal mining company founded by Peter Christianos Snr., who has over forty-five years experience in the Australian opal and gemstone industry.

In 1956, the founders' parents George & Zoë Christianos left Adelaide in search of Australian opal with their four young sons. Peter was thirteen years old. It was a hot, grinding ten and a half day journey by light truck with van in tow on rough, dusty, dirt tracks. Through rain, muddy bogs, a dozen flats and sixty odd gates later they arrived at the great treeless and almost featureless plain that was Coober Pedy.

Today the same trip to Coober Pedy takes only eight and a half hours by vehicle on a sealed bitumen highway. When you arrive at Coober Pedy it now looks like a 'moonscape' riddled with mine dumps resembling craters. Those dumps at Coober Pedy are so plentiful because of modern drilling rigs for opal mining.

Back then, Peter and his brother Emmanuel would sink opal mine shafts with a pick and shovel an opal mine up to 90 foot down into all types of rock. Sometimes a hammer and chisel were used to dig holes, Gelignite was packed into these opal mine holes and exploded, the dirt and rubble was removed from the opal mines by hand-operated winches to the surface.

Old man George expertly shaped and sharpened their picks and augers for opal mining, he had them up and working at dawn and out of the opal mine shaft not long before sundown. Zoë kept an open camp, she fed her boys and any other hungry opal miners three square meals a day, but many times lunch was had down the opal mine shaft when the old man was not satisfied with the progress.

Water was extremely scarce and had to be carted from up to 50 km away, but the native emus made a great preserve and kangaroo tail made a great soup, even the odd bush turkey flew into the pot on occasion.

In 1959 after several seasons of opal mining their toil and acclimatisation in the face of unforgiving heat and harsh conditions finally yielded an unprecedented fortune at the famous Eight-Mile field. Many fellow Greeks were enticed and encouraged by the Christianos' and their find to try their own luck in the Opal mining fields. It is no coincidence that Coober Pedy's largest minority group is its Greek community.

In 1961, Peter Christianos went in search of Australian opals and his own destiny to Lightning Ridge New South Wales; Peter and his two new partners Bill Petrohelos and Les Voller worked for a syndicate funded by Professor Charles Phipps of Sydney University. Despite having filled Calico bags with Nobbies on a daily basis, the three young men each made the meager sum of 120 Quid for two whole seasons hand opal mining at the Nine-Mile and The Coorcoran Opal mining fields.

Thus, Peter, his brother Ross and partner Bill made an arduous three and a half week journey to Coober Pedy, through mud and rain with only 20 Pounds between them, resolved to make their fortune. The trio made camp and began working in earnest at the Ten Mile field. Nearly a year later Bill became homesick and returned to Collarenebri NSW, Ross also went walkabout, as was his custom.

For almost another year, Peter toiled at opal mining alone without success and became increasingly indebted to the grocer Bepe Coro to the tune of several hundred Pounds. He persevered and at the age of twenty made a most remarkable strike at the Ten Mile with an unheard of number of opal bearing levels in his claim. SIX LEVELS OF GOOD OPAL!

Later an open-cut by George Christianos, at his son's mine, with the first D8 Bulldozer in Coober Pedy revealed there were in fact TEN LEVELS OF OPAL-almost unbelievable.

Having found many thousands of ounces of Australian opals, Peter had the perfect opportunity to develop his innate skills at sorting, classing and pricing Opal. So he turned his hand to merchandising, he was well respected and entrusted by many with their Opal for classing, valuation and sale. He began exporting Australian opals to Japan in the 1963, then to Hong Kong, including his own opal factory there. Later he started exporting Australian opals including those from his own opal mines to the USA and Germany.

In the 1970's Peter was involved in the development of the Boi Morto opal mine in Pedro Segundo Piaui State Brazil, he has mined for Opaline materials (Opal & Chrysoprase) in every state of Australia except Tasmania and Victoria (hitherto unproductive for Opal).

Other forays include Diamond mining in Sierra Leone West Africa in the early 1980's, and Tourmaline mining in Minas Gerais Brazil in the mid 1990's.

The tradition of opal mining has passed on to Peter Jnr. son of the founder, who has taken an active managerial roll in the operations of Opaline Australia. Both father and son have been immersed in the Australian opal industry since childhood and continue to earn colourful stripes.

I thank Peter Christianos Jnr very much, for permission to re-print this article, and to reprint various photographs from the opaline website.

See other photographs in this Working Life section.